Everything you need to know about the latest additions to the Vercelli range of rods! George Cunningham is joined by Christchurch Angling Centre supremo Tom Bagnall and current England International anglers Callum Graham, Charlie Tudball and Ollie Hopkins for an days testing, with each angler giving their honest opinions of each rod as well as choosing their favourite from the new range.

The Vercelli range of rods have rapidly become a household name amongst UK shore anglers, combining continental charm with high end performance, these outstanding rods ooze quality and perfection! 2016 sees the current range of Vercelli rods joined by a further 17 new additions, doubling the range available! With so many new rods on offer, there was only one way to sort the men from the boys and that was to take them out onto the beach and give them the full TronixFishing once over.

I wasn’t going to be doing this alone. Quite frankly, with so many new additions, the prospect was too daunting, so I enlisted some help in the form of current England Internationals and TronixFishing pro staff members, Callum Graham, Charlie Tudball and Ollie Hopkins. Also joining us would be top retailer and boss of Christchurch Angling Centre, Tom Bagnall.

There are three sub ranges under the Vercelli brand, today we focused on testing the Vercelli Enygma (sub £200) and Vercelli Spyra (over £200) series rods. But, first let’s have a quick look at the brand new Oxygen series. 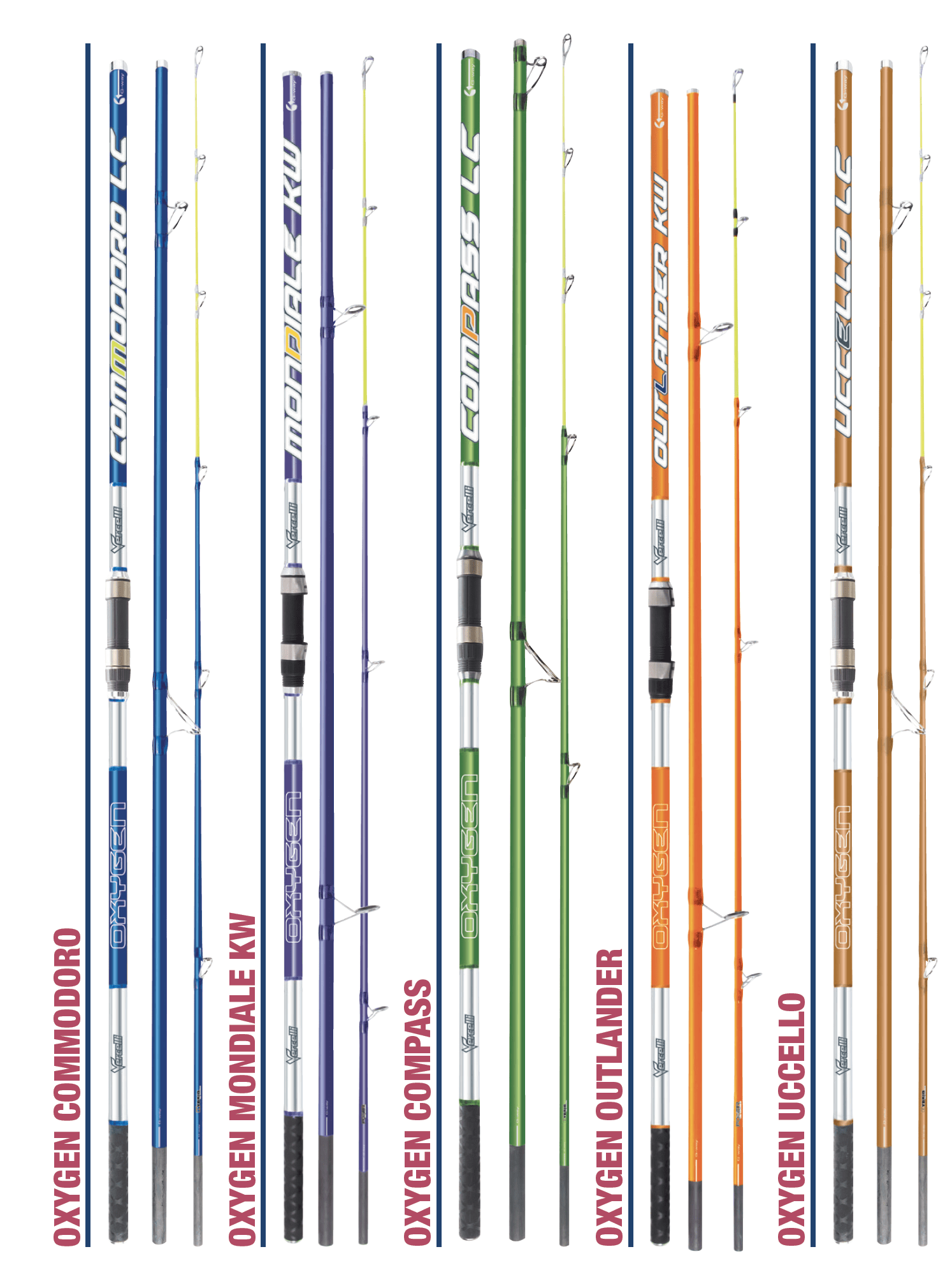 The Oxygen series is brand new for 2016, priced between £58.99 and £78.99, this is an affordable range of rods designed for occasional anglers and those trying continental rods for the first time. Each rod blank is built in full carbon and fitted with good quality SIC guides, despite the price, these rods are still built with the same level of attention to detail as the higher end Vercelli blanks. If you’re in the market for a good, dependable, useable continental rod that won’t break the bank, these rods are serious contenders for your hard earned!

The Enygma series needs no introduction to any Vercelli fan, the Xilenius and Gradiante models have garnered a cult like following throughout the UK and have become huge sellers! Here we take a look at the new additions to the Vercelli Enygma range to see which model is going to become the latest best seller and firm UK favourite! Ranging from £84.99 to £176.99 these rods sit firmly in the mid priced price point.

To create a rod with full Fuji fittings for £85 is nothing short of amazing. Charlie Tudball spent a fair bit of time casting this rod and described it as a “perfectly good fishing rod that’s pleasurable to use without being outstanding”. This rod is a good step up from the Oxygen series, featuring full Fuji fittings making this solid entry level rod. 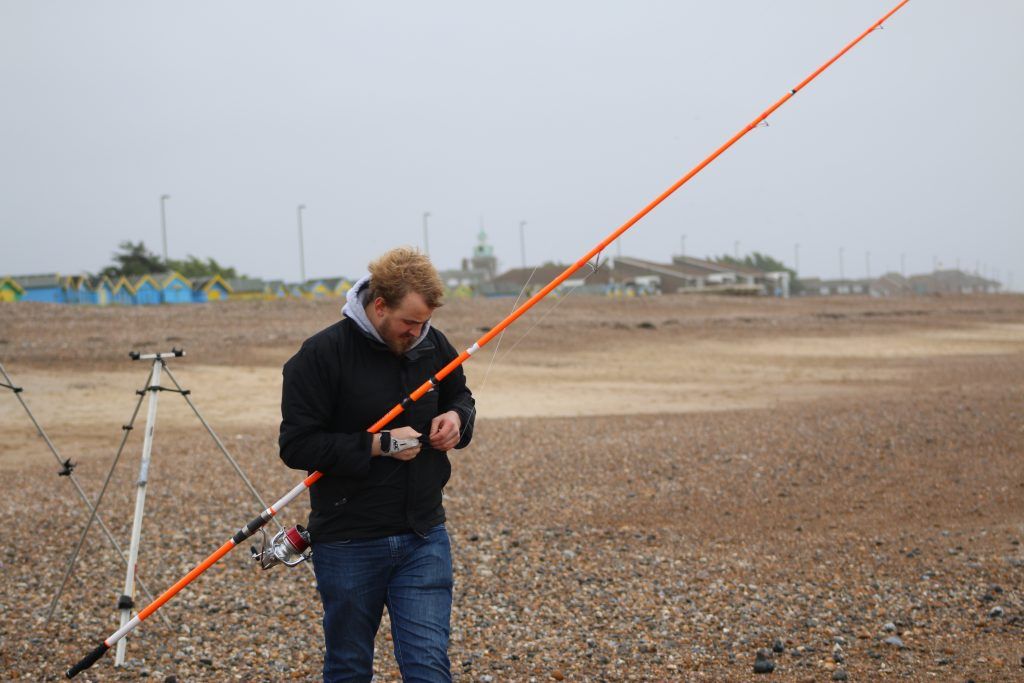 The Kalima rods replace the Xilenius. They are exactly the same in every detail apart from the name. The Xilenius rods have been our biggest selling Vercelli rods so we expect these to be just as popular. They feel just right in the hand and are a pleasure to use, also very popular with ladies and juniors. Available in three models:

We had no reason to test these on the day, we all know and love them already!

In order to review these rods fairly we tested each rod in order of price. It’s the only way to do this without formulating biased opinions on a cheaper rod after casting one three times the price! The Spider was the second rod we tested, all of the guys were in agreement that the Spider had a nice clean bend with a long hybrid tip, ideally suited for casting fragile baits such as maddies. It handled 6oz very well, but we all felt this was its limit and anything more would have outgunned the blank. This is a softer through actioned rod that is very pleasant to use.

Now, here is where things start to get really interesting! Tom was immediately taken with this rod even before we reached the beach and after a couple of casts his initial response was confirmed, an exceptional rod that should be £250! Here is what he had to say about it in full:

“Having had a feel of the rod at the warehouse and really appreciating the weight, balance and aesthetics, I was keen to test it out on the beach. I started with a 110g lead and very simple over head flick just to get the feel of the rod, it pinged the lead effortlessly away without any dramas but then I’d have been disappointed if it didn’t! So with the same lead I turned to my usual OTG cast and gave it some welly, the result blew me away. It fired the lead on a perfect accurate arc and recovered like it had just flicked out a pebble! It didn’t snatch, it didn’t wobble and certainly didn’t feel like it was anywhere near its limit! I straightaway shouted over to Callum to come and have a play, I knew he’d love this rod too! Repeating my two casts he came back grinning like a chesire cat, but confessed he didn’t think it had much more in it, it just felt so light! So on went the 160g lead (normally I’d go up the leads more gradually, but I wanted to know what this could do!), and repeated the process. Gentle flick produced no dramas, so on the ground the lead went and round she came. To my amazement the rod behaved exactly the same way as it did with the 110g lead! I expected it to fold on the mid section and wobble like a stick of rhubarb, but it just didn’t!!!

So I guess you’re thinking that this rod will be another £500+ piece of kit that you hear about but will never own! Think again. This has an RRP of £149.99!!! That’s ridiculous! Really ridiculous!”. 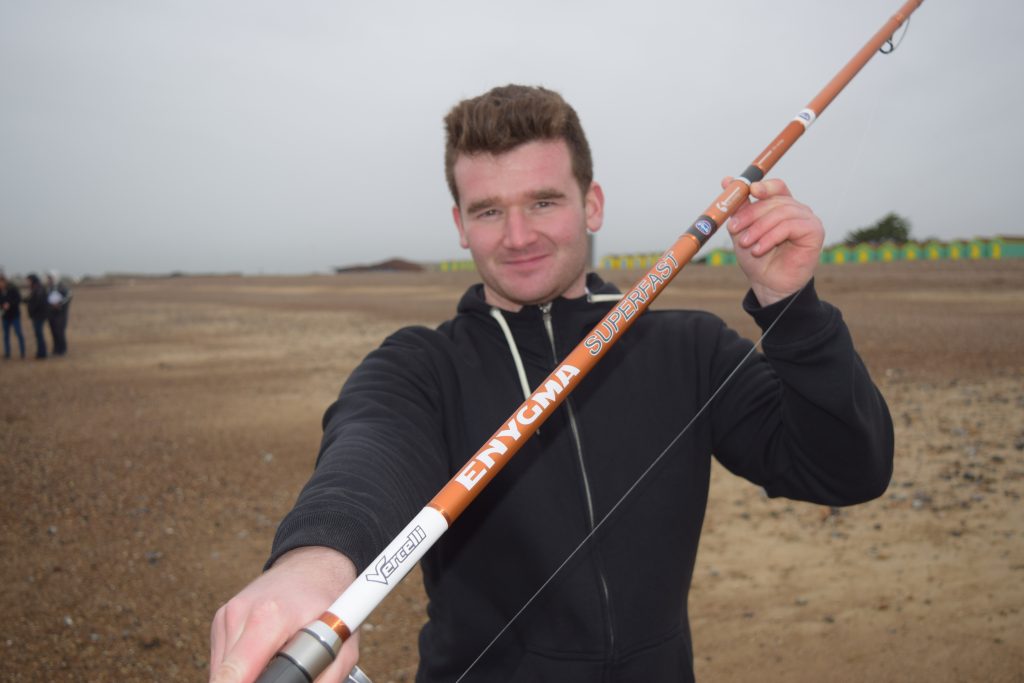 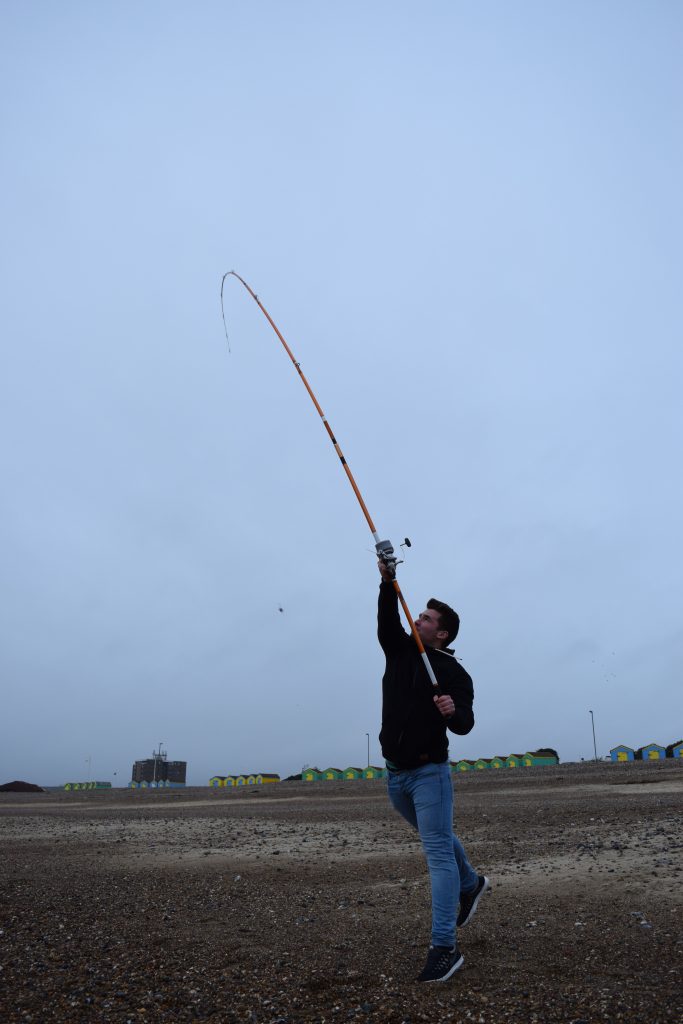 Unfortunately at the time of testing we didn’t have one of these to review. The rod is rated for up to 250g so we’re guessing it will be a whacking great beast of a rod!

That sums up the Enygma series, after all the rods were tested I asked the lads to name their favoutite, the result was to be expected:

The Spyra series has also become incredibly popular with UK anglers, the Amarella and Azzurra being the stand out favourites, otherwise affectionally known as the yellow one and the blue one!

With the newer models in this range costing from £215.99 and upwards of £630 (!!), we were expecting to be blown away by some very special rods, and we certainly weren’t disappointed!

Once Ollie Hopkins got his hands on this it was hard to get it back off him! Ollie stating that “It’s a nice pokey bit of kit, a great hybrid tip and a beefy mid section with a fast recovery, a real pleasure to fish with”. 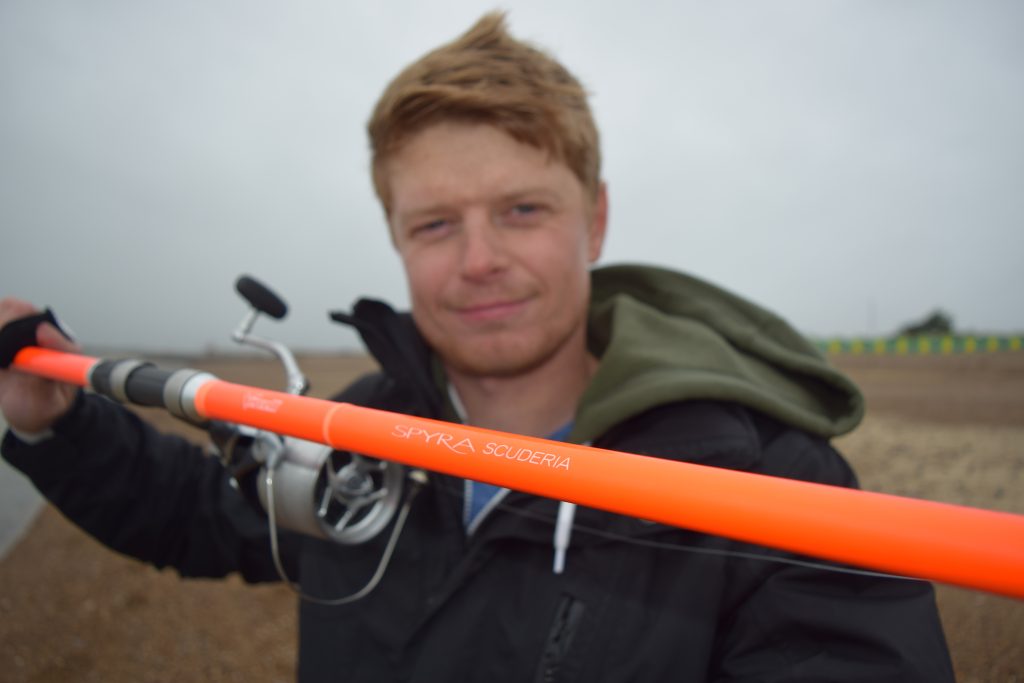 After just a few casts the general consensus amongst the crew was how similar this rod is to the Azzurra, with one vital difference, it subtly has more power. Whilst the Azzurra is a very capable and highly rated rod, it often receives criticism that it is just a little bit too soft through the mid section, the Impala corrects this, adding in more power to the mid section to make it feel a more complete rod. This is also the first in the range to use the new Vercelli Tournament Hybrid Tip, a carbon tip that is lighter than the blank itself. We’ve also noticed that on the more expensive rods, the tip sections are shorter than the butt and mid sections. We have no idea why this is, but, I’ve asked the question and I’m awaiting a reply. I’ll update this blog as soon as I’ve got an answer, so keep your eyes peeled! 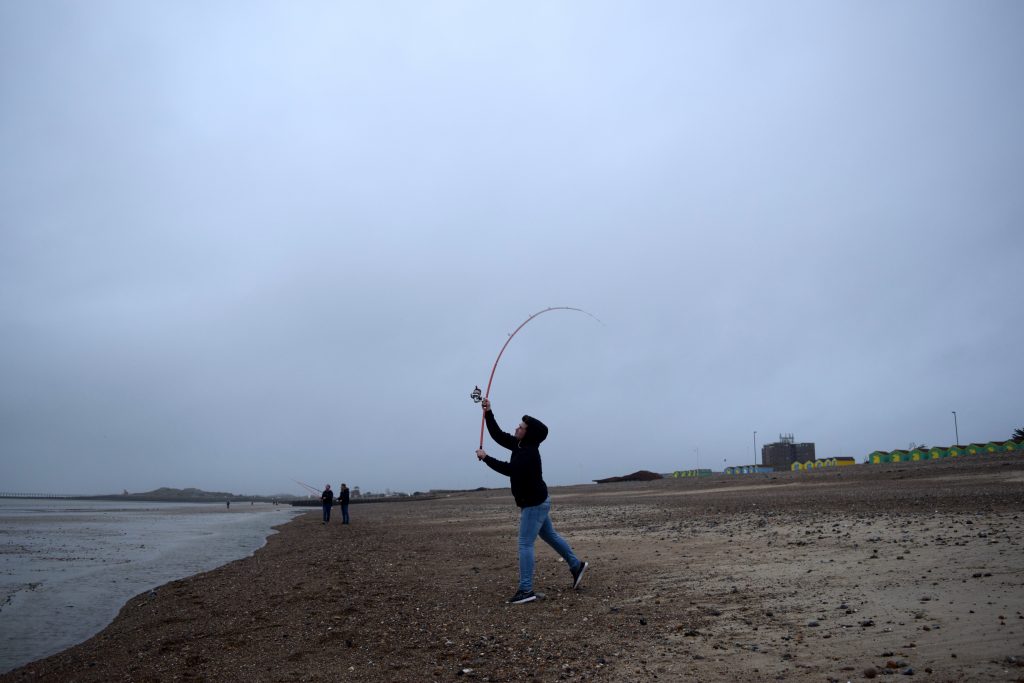 You know that warm fuzzy feeling when you pick up a rod and think “cor, yeah, this is a nice rod” – well, the Spyra Competizione is that kind of rod! Even adding a reel and getting this ready for some casting action didn’t detract from its superior balance and lightness. Needless to say, we were all itching to have a go with this beauty, it didn’t quite come to blows as to who would get to cast it first, but this is certainly a rod that could get you into some trouble, if you know what I mean!

Tom Bagnall said, “An exceptionally well balanced light blank with a superfast action. Superb all round scratching/match tool, not a big fish rod”. 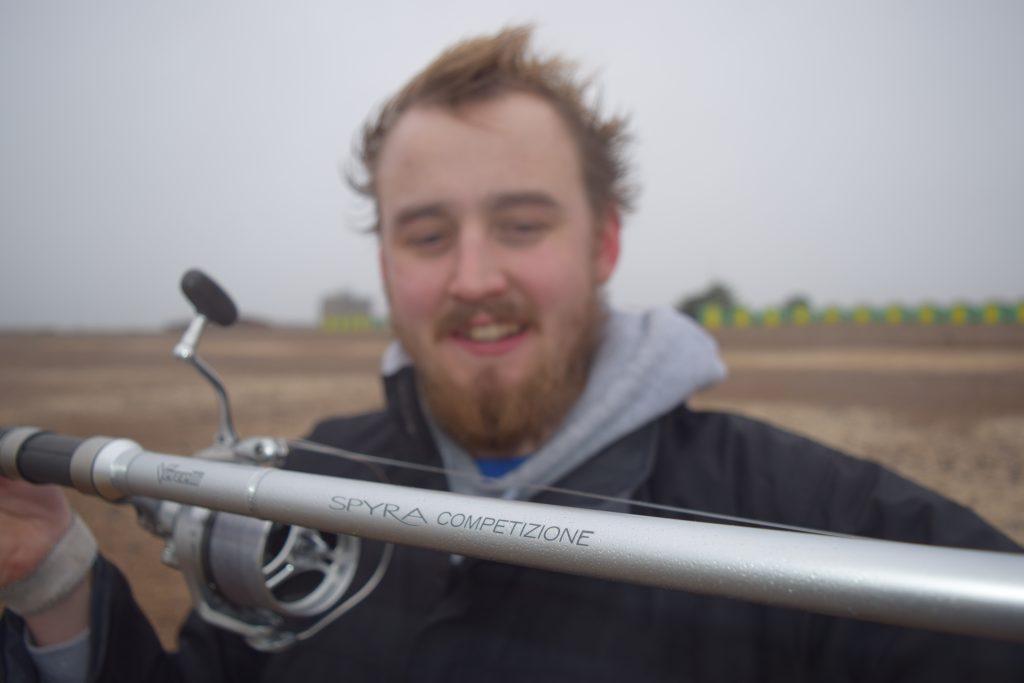 I’m not going to say too much about this rod here as it is the same blank as the next one, the only difference is the colour of the rod and the guides, the Squadra being slightly cheaper as it is fitted with Fuji Titanium low rider SIC’s. The colour is quite spectacular though, a pearlescent blue that has to be seen.

Well where do we start? What does 630 quid get you these days and how on earth do you justify it to the other half?!

The first thing you’ll notice with the Spyra Augusta (and the Spyra Squadra) is the length, an unusual 4.10m, yes, that isn’t a typo, that is the correct length. The general consensus is that a rod of 4.2m is the way forward when you want distance, any international angler will tell tales of the Spanish shore anglers who can whack leads to incredible distances with rods of this length. After rigorous field testing and experimentation over many years, these top casters have found that by reducing rod length by 10cm, you can achieve even greater casting distances. Hence why both of these rods are an unusual 4.10m long, they’re designed for optimum distance.

These rods also feature a new tip, different to the Tournament Hybrid Tup found in the cheaper rods in the Spyra range, the Competition Sensi Tip is a softer solid carbon hybrid tip, ideal for recognising even the most sensitive bites at distance. The combination of a distance casting tool with incredible bite detection makes this a class leading rod and a match anglers dream. 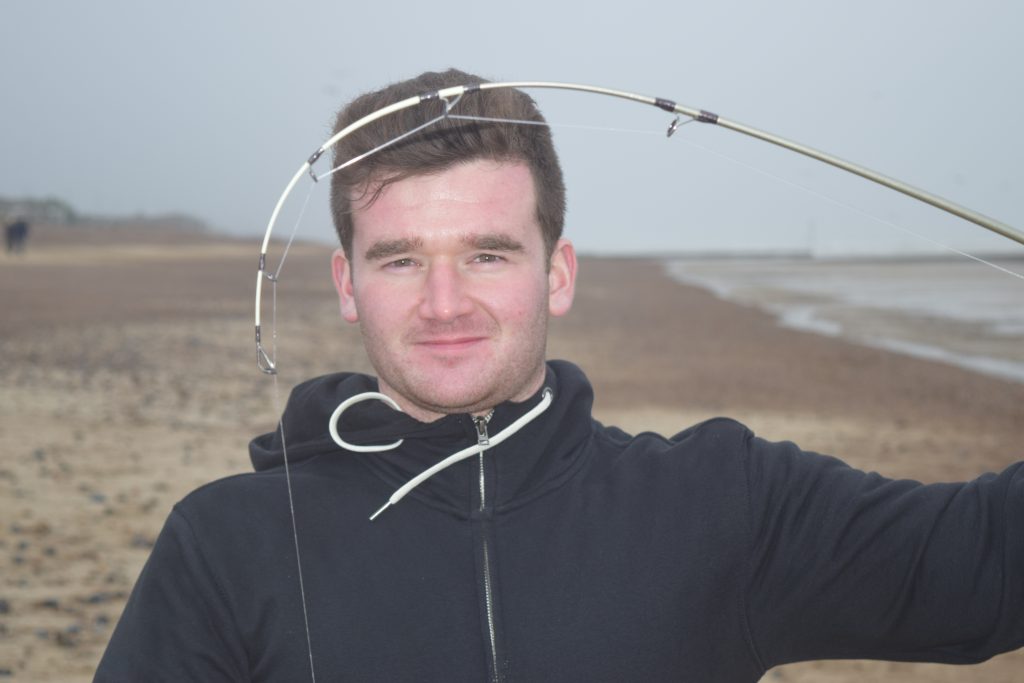 Exceptional rods also come with exceptional fittings. A big misconception amongst some anglers is that you’re only really spending your money on the blank and design work. The fact is, good quality, top of the line fittings costs money too. In fact, the rings fitted to this rod would set you back about £200 on their own! The first two rings are Fuji Titanium RV Torzite stripper guides, specifically designed to breakdown and control the coils of line as they race off your reel during a cast. Next are a mix of Fuji Titanium KW and KT Torzite Rings, acknowledged as the lightest and best rings, and consequently, the most expensive money can buy.

Callum said “The Augusta is an incredibly crisp and light blank, unlike any rod I have ever seen before! It’s got tonnes of power and will make a brilliant long range scratching tool thanks to its ultra sensitive tip.”

With all the rods tested we decamped from the beach to find some shelter and discuss our findings, eventually each angler chose their favourite rod from the new Vercelli additions.