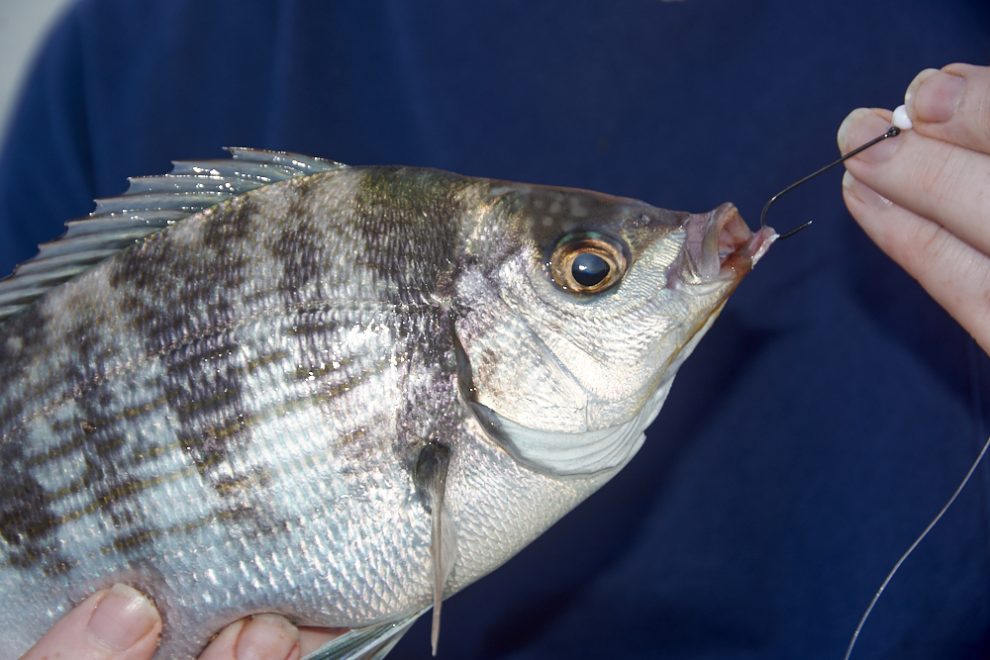 Tronixpro tronixprotronixpro1
Black bream are a favourite summer species, hard fighting and great to eat. We look at the tackle, bait and tactics to catch them.

Black bream fishing from the shore is roughly limited to the English Channel coast from Sussex to Devon, the Channel Islands, and off the Welsh coast from Fishguard and Newquay, up and along the Lleyn Peninsular, and inside the Menai Straits. A few fish are sometimes taken from shore venues along the Cumbrian coast and even off the Mull of Galloway, but they are not overly common this far north.

They are shoal fish, so a good-sized fish would be around 1 to 1.5lbs from the shore, with anything over 2lbs generally classed as a shore specimen. What they lack in size, they make up for in sheer numbers, and it can be a bite a cast.

The shore black bream season begins in late April in the south and extends into October if the autumn gales are not too severe. In Wales, it is usually late May when they appear, but June is more typical. They stay until the first rough seas in September, then quickly depart. The further north you go, the later the fish appear, with late June more likely off Cumbria and the Mull of Galloway.

Their preference is for patches of boulder ground amongst sand, but more likely, they’ll be found in rougher ground with bigger boulders, little peaks of rocks and low rock ledges. They also favour weed beds, especially eelgrass beds. Smaller black bream sometimes referred to as “checkers”, will also be taken underneath and tight into man-made structures such as piers and breakwaters.

They also show from open sea rock ledges casting into deeper water where the ground is rough and peaky or with bigger boulders that have fallen from nearby cliffs. They also swim amongst kelp weed beds, and these can be real hotspots and often produce the biggest shore fish.

Black bream are lovers of settled seas and calm weather, especially when feeding in shallower water less than 10ft deep. Overcast days produce better fishing, but you’ll still catch even on the brightest sunny days, though overall numbers may be significantly lower when the sun beats down. Light wind to put a ripple on the surface helps when fishing in bright sunny conditions as it limits the light filtering through the water column.

They do not like seas that carry colour in the water after a persistent blow. They come closer to shore when the seas are clear and with good clarity.

If you’re fishing a mark with a more consistent depth of 12ft or more, the bigger tides can fish well, as they can off the rock ledges and when fishing from a man-made structure. If you’re fishing the beaches in water less than 10ft in depth, the smaller neap tides that give a more constant depth will usually fish best. They like some run in the water so expect the best fishing to be on the flooding tide from the second hour to the fourth hour, with bites tailing off either side. Ebb tide marks do exist, usually off rocks and breakwater, but mostly you’ll find shore black bream feed best on the flood and quickly move out when the tide starts to ebb.

Dusk and dawn, when the light is there but subdued, can be an excellent time to fish, especially if it coincides with the flooding tide.

The casting distance needed to reach the fish is the governing factor regarding tackle choice.

For shallower venues in calm weather, a lighter rod such as the Tronixpro Banzai Multi Tip with a length of 14’9” and rated from 2oz to 5.5ozs covers all options. It’ll cast to range if needed but has the bite detection skills in the softer tip sections. Go for a 6000to 8000 sized fixed spool reel, like the Tronixpro Banzai LC Surf and load with 20lb Tronixpro X8 Power Braid and an AXIA Fluorocarbon or clear mono leader appropriate to the lead weight you’re casting. Bream have good eyesight and can be line shy in shallow clear water, so the Fluorocarbon can make a real difference, even compared to clear mono on very bright days.

You’ll need to step up your tackle strength in deeper water and over rougher ground. The Tronixpro Banzai BZ5 fits the bill nicely as it’s rated to cast 4-6ozs and with a length of either 13ft’9” or 14’9”. Combine this with a 7000/8000 sized fixed spool like the Banzai FS8000 and load with 30lb braid and a 60lb mono shock leader such as the Xenon Leader or Tapered Leaders.

Good rigs for bream are simple 2-hook rigs using shorter 12 to 15-inch hook lengths of 15 to 20lb Fluorocarbon. The same rig but with shorter 8 to 10-inch hook lengths with a float bead added above the hook helps to lift the baits up and move about when fishing in weed and gets you extra bites.

Bream have small mouths, so hooks should be Aberdeen patterns in sizes 6 to 2, with 2 to 4 being a good compromise. The long shank of the Tronixpro Aberdeen helps avoid deep hooking. Alternatively, some anglers use dedicated bream hooks (chinu) such as the Tronixpro Chinu Ring hook.

Bream also sport small sharp teeth, so using Fluorocarbon hook lengths, Fluorocarbon being much tougher to chew through than mono, will gain you extra fish. The fish don’t see the hook length as easily, either.

Living in a shoal, black bream don’t get the chance to be fussy eaters. They will take most common baits such as worm, peeler crab, mussel, and razorfish, but some have the edge over others. Mackerel strip is a favourite, as are small strips of squid with the skin removed to bring out the white flesh. Cockles can be killer bait, even pickled cockles in a jar which takes some believing. One of the best baits of all is supermarket prawns which can often pick out the bigger fish.

Bream also respond well to cocktail baits. Try tipping crab with mackerel or a half prawn with a cockle. A small section of lugworm tipped with a small square of mackerel is also good. When bites are not coming as fast as you’d like, a combination bait can up the bite ratio.

Bream bite with a series of fast rattles, then swim off at speed. If you use a release wired lead, most of your fish will hook themselves. If the rod pulls down and you see slack line, wind into the fish and let the rod tip pull the hook fully home.

When you start getting bites, it can often pay to use the line clip on the reel and clip into that exact distance. Bream tend to work the same patch of ground as the shoals come through, so having that in your mind can help increase catches. Alternatively, fish two rods at different distances to help you establish exactly where the fish are feeding, which helps you maximise catches.

If you’re catching small bream, then it goes quiet, pay attention as this can often be the period when a bigger black bream turns up. The bigger fish swim behind the smaller fish and rarely amongst the main shoal.

Even with the long shank Aberdeen hooks, you’ll still get a percentage of deeper hooked fish. To make hook extraction easier, carry one of the Tronixpro Disgorgers, which are very simple to use. Slide the line through the loop at the end of the disgorger, slide the disgorger down the line until you come to the hook, then just push gently but firmly, and the hook will pop out. It doesn’t just work for bream but for flatfish and pretty much any other small fish. It’s brilliant!

For a quick demonstration of how to use the Tronixpro Disgorger, check out the video below: