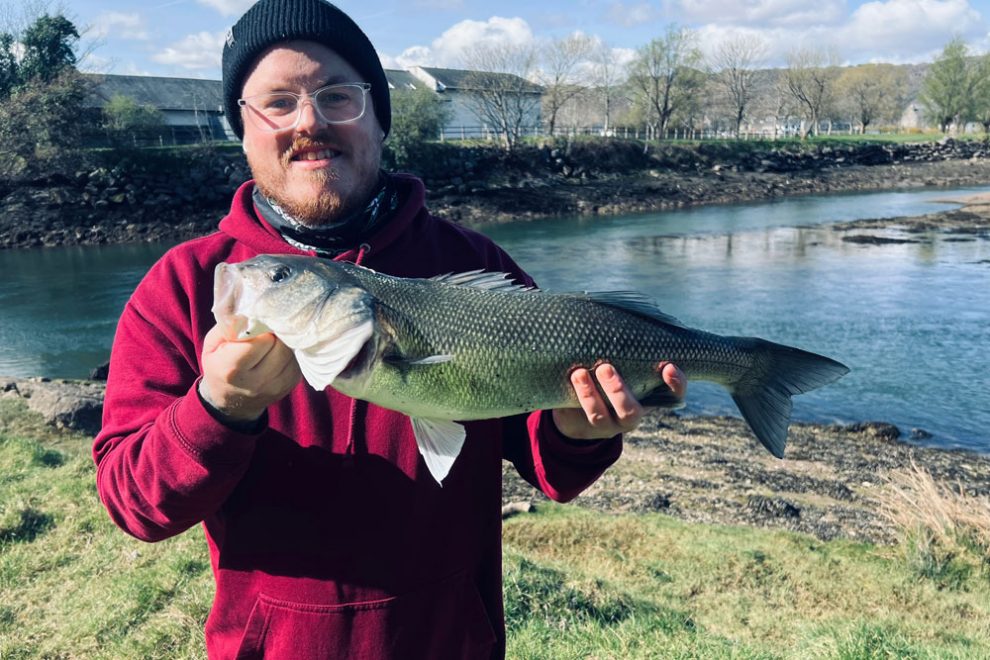 Tronixpro tronixprotronixpro1
In this simple fishing guide, we look at estuary bass fishing with bait, the kit you need, the baits to use and tactics for success.

Bass bring out the hunting instinct in anglers, and there's no better place to target Britain's most popular sea fish than in our many smaller to medium-sized estuaries, these being common along the south and southwest coast of England, the Welsh coast, in the Northwest of England, and estuaries along the east coast. Ireland also has many smaller estuaries dotted along its south and west coasts, all with a good head of bass resident.

Bass average between 2 and 4lbs, but you're always in with a chance of better fish between 5lbs to 8lbs.

Bass can be present in estuaries most of the year, though, in the colder period from December to early March, they are likely to be generally smaller school bass. May into June is the true beginning of the estuary bass season. This is when the estuary bass numbers start to peak and coincide with a plentiful supply of peeler crab. July and August may see a small and brief decline in overall bass numbers within the estuary as some fish will move out to feed on reef sandeel, but by the end of August, the bass will be back inshore and running the estuary daily right through until mid-November, sometimes later.

It's easier if we split the habitat into three distinct areas. Small estuaries often have a shallow bar at their mouth. The bass will congregate here on the seaward side of the bar, but as soon as the flood tide turns, the bass will push over the bar and into the main estuary channel when the depth allows. They use the early tide flow to travel further into the estuary to cover as much ground as possible. As they come over the bar, they can be caught casting into the main flow, especially if there are mussel beds or exposed rougher ground, as they will fully cover such areas.

The third thing to look for are areas where weed and rocks form along the edge of the channel sides. The mud holds warmth, and the weed and rocks create natural cover for crabs to peel in, and the bass will nose through this. This can be found alongside the edges of some main channels but is more common along the side creeks.

Bass don't care about weather patterns when in estuaries. They'll feed in daylight and even in bright sunny conditions, though ideally, cloudier days with an overcast sky are best for daylight fishing. If you have the choice, fish the night tides, especially tides that begin to flood in darkness. These are the best!

Bass can be affected by heavy acidic floodwater and will not move too far up the estuary when this is prevalent. They quickly return when the water quality improves over a few tides. This especially applies in the later autumnal months.

Bass will run the estuaries on all sizes of tide, but as ever, the most consistent catches will occur during the middle-sized tides up to the biggest spring tides. Once the tides begin to drop in height towards smaller neap tides, the bass numbers will not be as good, and catches will reduce. In estuaries, bass can be caught on the ebb tide as they exit the estuary. They tend to show best through the middle hours of the ebb during the strongest flow when they use that tide speed to push out quickly.

Estuary bass fishing is about keeping mobile and holding the rod all the time to respond instantly to rod-thumping bites. The tackle needs to be light and comfortable to hold for long periods.

Bass rods 11ft 6in in length and rated to cast 2-4ozs suit all estuary bassing. The Tronixpro Banzai Bass rod is a perfect example. Most are rung with hybrid rings meaning they can be used with fixed spool and multiplier reels. Fixed spool reels should be in the 5000-size range, such as our Virtuoso Air 5000 reel and be loaded with 20lb braid. You won't need a shock leader if you don't use leads heavier than 2ozs. Add a 30lb Fluorocarbon shock leader if you use leads of 3ozs. Multiplier reels should hold 250m of 15lb 0.35mm mono line, then add a Fluorocarbon shock leader of 30lbs.

Braid line, like our Tronixpro X8 Power, reduces tidal pressure on the line, meaning you can use lighter leads to hold the bottom than you can with mono. Braid also gives better bite indication as it has no stretch. However, clear coloured mono can be an advantage, as can Fluorocarbon as a mainline as it is harder for the fish to see when fishing very close in, in clear water.

The best rig for longer-range fishing is a clipped-down 1-hook paternoster. The hook length should be 20lb Fluorocarbon or clear mono and about 20-inches in length. End with a size 3/0 to 4/0 Tronixpro Beast Uptide hook. For close-range fishing in the creek edges, change to a simple flowing trace rig with a Tronixpro Hanging Snap Swivel sliding freely on the main line, stopped by a bead, then tie on another swivel. To the free eye of the swivel, tie on 18-inches of 20lb Fluorocarbon or clear mono and a size 3/0 or 4/0 hook. This latter rig gives instant bite indication but presents the bait naturally on the bottom with the hook trace long enough to allow a wary bass to fully take the bait in.

Use release grip wire leads when fishing the bar and main channel, but for fishing the edges of the creeks, a light ½ to 1oz weight is heavy enough, but make sure any shine has been removed from the lead by soaking it in vinegar first. Bass will shy away from bright objects adjacent to food in shallow water.

There is only one bait for estuary fishing, and that's soft or peeler crab. Both are highly effective as it is exactly what the bass are hunting for. Keep the bait size just big enough to fill the hook, no bigger. Bigger baits will cause bass to run off with the bait but not necessarily take it fully in. Cutting a peeled crab body in half and then binding them to the hook with Tronixpro Baitex creates a bait oozing juices which is exactly what you need.

In the autumn, razorfish can work in the main channel and lug and ragworm, but the worm baits tend to attract the smaller fish.

Remember to look for ground features that bass will visit as they move through the estuary. This means carrying minimal tackle. We use a Tronixpro Rucksack or our 30L Dry Bag (which converts into a rucksack), a Tronixpro Single Rig Wallet and a Tronixpro Small Cool Bag to carry our tackle and bait. Just three or four spare rigs, a few hooks and leads, bait elastic, enough bait for the session, and a Tronixpro Sand Spike to hold the rod while you bait up, scissors and pliers, and that's about all you need. This means you can make a few casts, then walk 100 to 200-yards down the estuary and keep pace with the fish as they move through, or ambush new fish as they pass by.

Hold the rod parallel across your body, leading hand on the reel, spare hand on the rod with the rod tip down almost at water level and keep the line almost tight to the lead. This helps magnifies bite detection. Bass bites are hard thumps on the rod tip, and you need to lift the rod up and backwards to strike instantly you feel this on the rod tip to set the hook.

When fishing the edges of the side creeks, keep a low profile and try to hide yourself. Bass have excellent eyesight and will spot you and movement a long way away. Also, keep noise to a minimum.

Use the lightest lead you can get away with when fishing the edges. And if you can just swing the lead in instead of casting it, do so. Stealth will put extra fish on the bank!

Other Nice to Haves!