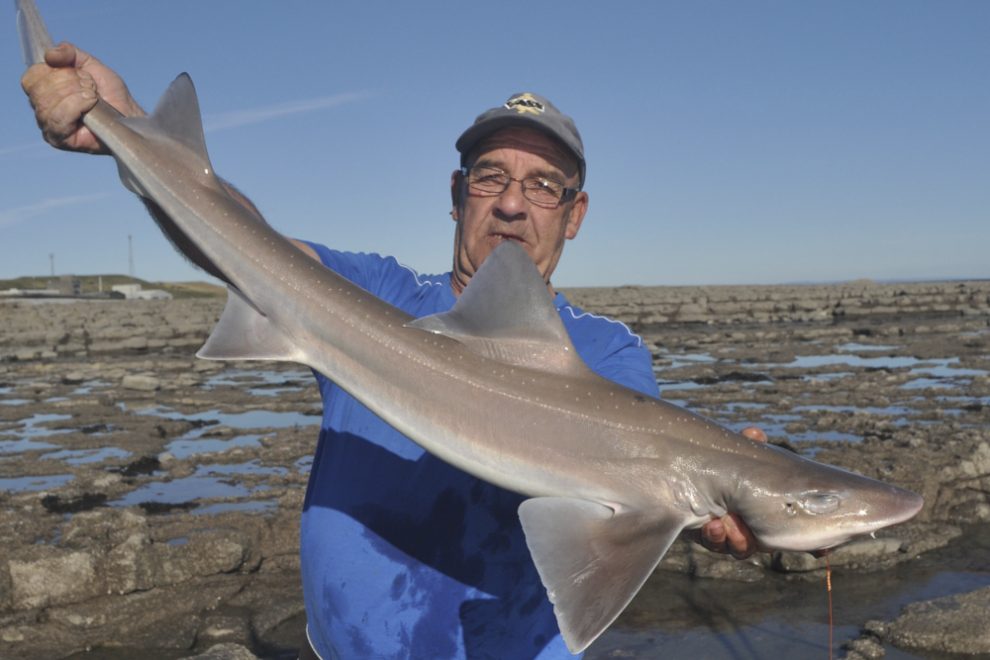 Tronixpro tronixprotronixpro1
Tronixpro Know How: In this simple fishing guide we cover everything you need to know to get you started with shore smoothhound fishing.

Smoothound are one of our hardest fighting shore fish and available in good numbers in many areas making them the ideal target for the summer sea angler. Part of their appeal is that they are shark shaped, but they lack any teeth having hard abrasive gums designed to grab and crush prey, such as crabs.

They average between 5 and 8lbs, but with double figure fish between 10 and 15lbs common. They grow to just shy of 30lbs, but if you’re targeting a specimen sized fish off the shore, then your target weight will be 14lbs.

Along the south coast you may get a very early run of smoothound around the end of March after a mild winter. April is when the fish start to appear in numbers, usually towards the months second set of spring tides. The further north you go along the east and west coast, the fish appear two to four weeks later from late April to mid-May. They travel as far as the Holderness Coast of Yorkshire and in the west show from the Severn Estuary, off Caernarvon, Anglesey and the North Wales coast, Merseyside, and the Northwest from Morecambe Bay as high up as Luce Bay and the Mull of Galloway.

They stay until late August in these more northern climes, but in the south, they can still be caught along the Channel coast as late as October.

They frequent shallow sandy surf beaches especially along the Lincolnshire and Holderness coast running the parallel gullies that are a common feature of these beaches. They generally prefer rougher ground though, as the mainstay of their food supply is crab, and the crabs are commonest in rougher ground. They also run estuaries, again hunting the main channels for crabs, though this applies mainly to larger estuaries, not the smaller ones common along the West Wales coast. If smoothound are being caught on your patch of coast, fish the rough ground beaches and you won’t go far wrong.

Prolonged periods of rough weather and heavy seas push the fish out. They prefer settled conditions with light onshore winds and a light or steady surf pattern. Occasionally, bigger fish that tend to run in smaller packs of up to a dozen fish or so and away from the packs of general sized fish can be taken in heavier seas, but the fishing is unpredictable.

When fishing in daylight, look for days with an overcast sky rather than bright sunlight, though if there is some colour in the sea you’ll still catch in shallow water by day. Dusk into darkness coinciding with low water is a good time off the beaches with the packs of smoothies moving inshore in numbers to feed.

On the shallower beaches, the bigger tides fish best with the middle tide period when the tide is fastest usually the best. Tides increasing in size will out fish tides that have peaked and are falling back towards smaller neap tides. On deeper venues, and especially inside estuaries, the smaller neap tides can produce well as the tidal flow will by lighter and often there is less estuary weed to contend with. Smoothound do not like heavy concentrations of freshwater, so if there has been heavy rain recently, avoid the estuaries and fish the beaches well away from any freshwater outflow.

Smoothound hunt in packs comprising scores of fish, and they’ll quickly decimate the food supply in any given area, so expect them to quickly move on spending only two or three tides or days on localised beaches before moving on.

If you’re fishing mainly clean ground a continental style rod of 14 to 15ft rated to 175/200g, such as a Banzai BZ6 matched to an 8000 sized fixed spool reel like the Virtuoso XT will get you maximum distance, which can be important in shallow water. Load the reel with 30lb braid and complete with an 80lb braid leader. This tackle is also suitable for mixed rough ground. The other option is a 13ft beachcaster casting 5-6ozs with a multiplier reel holding around 275yds of 18lb mono and a 60lb mono shock leader, our Xenon Power matched with a Guerilla Mono Mag is perfect for this.

In heavy rough ground anglers are moving over to the longer 14 to 15ft rods, again with a large 8000 fixed spool reel and loading with 40lb braid and an 80lb braid shock leader. There is real winching power in the big, fixed spool, a faster retrieve, and the longer rod helps keep both the fish and the tackle out of the snags. Rods for this heavier type of fishing will be rated to cast 200g and more like the Banzai BZ7.

The clipped down pulley rig is perfect for all shore smoothhound fishing with a 4/0 Tronixpro Big Dog II hook the ideal size and shape as well as Tronixpro Beast Hooks.

Release grip wire leads are needed for fishing over sand in the 5 to 6oz range. These work well in rougher ground as the wires stop the lead from moving and dropping into cracks and snags.

In very rough ground you may need to rig a weak link to the lead so that the weight can be sacrificed if it snags. To do this retain clip on a standard Tronixpro Casting Snap With Clip with the eye facing down on to the Tronixpro Big Bait Casting Snap. Take 6-inches of weaker 15/18lb mono and tie one end to the free eye of this link. Tie the other end to the eye of a plain lead between 4 and 6ozs. Position the wire eye of the lead onto the clip wire facing upwards from the Casting Snap link. This allows you to still clip the bait in position for casting, but when the weight hits the sea, the lead will fall free of the clip and leave you attached only by the weak link which will break if necessary to retrieve tackle and fish should it snag.

Peeler crab, soft crab, and hardback crab are the best shore smoothound baits. Make the baits no bigger than 2.5-inches long and a little more than an inch wide in a basic sausage shape. This is the ideal size for the average smoothie to take straight in. Bigger baits can be picked up and dropped or not taken fully in and you’ll strike thin air. This is the commonest mistake when targeting smoothound, baits that are too big!

They will also take sections or whole smaller sized squid. Cut the head off the squid and use just the body. Smoothound will often pick up the head of the squid and swim away tearing it free leaving them too far away from the hook to connect.

Frankly, catches fall away to little more than nothing if you stray away from crab and squid baits, so stick to these for consistent returns.

How to Fish for Shore Smoothhound

Fishing two rods side by side means you can fish at two different distances and find out where the fish are running. Put one out to maximum range and the other at half that range to begin, then adjust the other rod to the same range when bites occur.

Smoothound can often pass through quickly with bite periods relatively short being just an hour or two, sometimes less. Fishing two rods obviously doubles your chances of fish. They hit the bait hard and will pull rods in sometimes, so make sure your rod rest is well and truly anchored for total security and always pay attention.

The big, fixed spool reels hold a lot of line, especially braid, and this allows you to make a long cast, then as the tide floods back on shallower venues you can leave the bait out there and just keep releasing line as you are forced backwards. This works well on the shallow Lincolnshire beaches, for example. This trick can gain you early fish before the flood tide is deep enough to concentrate the fish at closer range.

When fishing open surf beaches, concentrate around any rough ground patches, or where rough ground dominates. Even small areas of boulders will be enough to attract them.

Remember to make a mental note of where the deeper gullies are and try to cast into these. If you look at rough ground over low-water you’ll see areas where water sits and does not drain away. These will be a hotspot for food to collect and attract fish.

Smoothound usually hook themselves against the weight of the lead, but you should still respond to a bite by picking up the rod, letting the fish pull the rod tip over under pressure then lift into it to set the hook. Have the clutch set so the fish can take line under steady pressure to tire it.