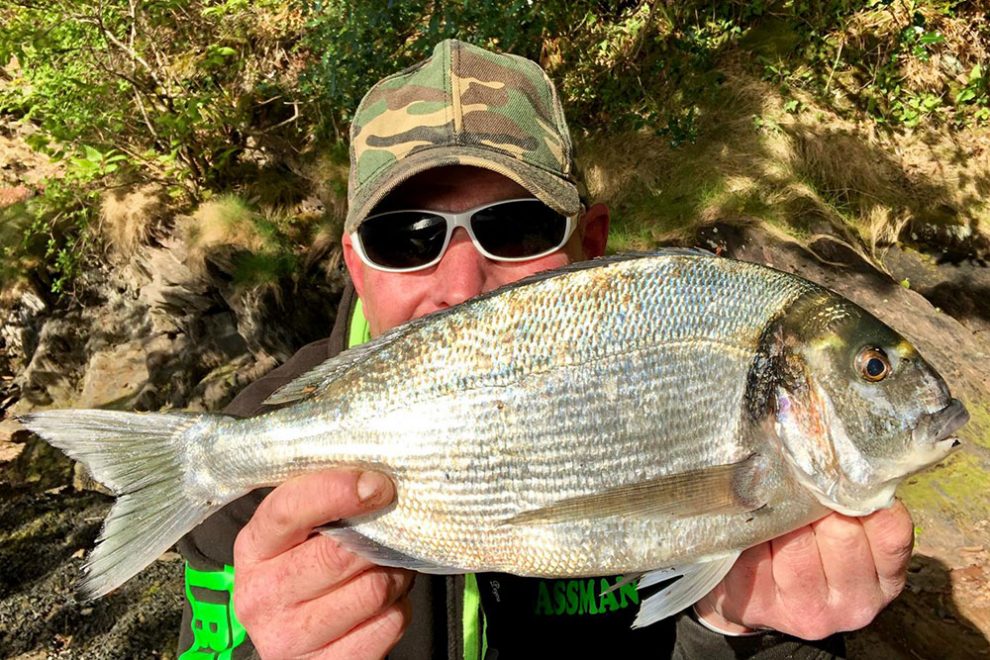 Tronixpro Know How: A look at the best tackle, baits and tactics to bag yourself a gilthead bream.

Due to warming sea temperatures over the past two decades, Gilthead Bream have gradually become more common along the south, southwest and Welsh coast. Their summer migration now extends as far as Northern Ireland and even Cumbria. They also have cult fish status amongst both species and specimen anglers. The current British shore caught fish is a whopping 12lb 2oz from Devon.

After very mild winters they can appear in late March in the southwest, but it’s normally April when they arrive in numbers, especially further north off the Welsh coast. Their numbers increase through to June, and they’ll stay inshore until September in the south of Ireland and the estuaries of Devon and Cornwall. They can still be caught in October if rainfall and flooding coming down the rivers is minimal. Due to their increasing numbers nowadays, there is growing evidence that some fish stay even later with fish recorded in North Wales as late as December.

Gilthead’s favour sandy or broken ground surf beaches but are typically found running through small estuaries such as those found in Devon and Cornwall, along the west coast of Wales and southern Ireland. In these, they run the muddy channels and briefly visit deeper pools especially if there are rocks adjacent. They will run high up the estuary but not into the divide where freshwater meets the sea.

Good places to fish for them are the ends of surf beaches where cliffs or rocks are found, and in estuaries, target the smaller side channels as the tide floods that are close to the estuary sides. They are not nervous about feeding in relatively shallow water, even 2-feet deep.

They do not like heavy surf conditions and strong onshore winds on the beaches. Look to fish when the weather is fairly settled, the sea calm with a light surf, and there is some cloud cover. Good clarity to the sea also helps as they seem reluctant to run beaches when there is suspended sand in the water. Daylight fishing is the norm for giltheads which are less inclined to feed in the dark and maybe push out into deeper water.

In most cases, the flooding tide is always best on both the beaches and inside the estuaries. Spring tides out fish neap tides, but in the smaller estuaries, you can still get bites on the smaller tides. The peak feeding period for gilthead is the middle hours of the flood, but you can get the odd fish as they drop back on the ebbing tide when fishing estuaries. They like some tide run, so expect the fish to appear around an hour up the flood, but they run through quickly and you need to keep moving to stay in contact with the bream shoals.

The Right Tackle for Gilthead

For beach fishing, most anglers would choose a 12/13ft standard beachcaster rated for 4-6ozs matched to a 6500 sized multiplier reel. Load the reel with 18lb mono for general fishing, but if the ground is a mix of sand and rocks, go to 18/20lb mono and a 60lb shock leader. Alternatively, a 14/15ft continental style surfcasting rod rated to 6ozs (175g) and a size 7000 or 8000 fixed spool reel carrying backing and 300yds of 20/30lb braid line with a 60lb braid shock leader. These are fine when longer range fishing and casting into the rougher broken ground.

For calm seas and good weather off the beaches and inside estuaries, a bass rod around 11ft 6in rated to cast 2-4ozs will easily cast far enough and offers a sporting balance with excellent bite detection. Reel choice could be either a 6500 multiplier with 15lb line and a 30lb shock leader for fishing 3oz lead weights and smaller baits or a 5000 sized fixed spool loaded with backing and 20lb braid will give excellent distance, good bite detection and being a low diameter line reduces any tide pressure and allows lighter leads to be used.

For both beach and general estuary fishing a 2-hook flapper rig and grip leads works well but ensure the lower hook is positioned right behind the lead weight to keep the bait hard on the bottom. Hook lengths should be 15-inches of 20lb Fluorocarbon for beach work but go to 20-inches when fishing estuary channels. Gilthead do not have overly big mouths, so keep hook sizes smaller. A good all-round hook is a size 2 Aberdeen which in a standard gauge will handle even double figure fish.

Some specialist Gilthead Bream anglers fish even lighter inside estuaries choosing a 10 to 11ft mullet rod casting no more than 2ozs, a 4000 sized fixed spool and 20lb braid with a short 20lb 6ft Fluorocarbon leader to hide the braid from the fish which can be very line shy in clear water. Top rig for this outfit is simple sliding ledger rig with a small link swivel sliding on the main line stopped by a 5mm black bead and a swivel tied to the leader. Add a 20-inch Fluorocarbon hook length and a size 2 Aberdeen and you have an effective and relatively inconspicuous rig for close in fishing.

One thing worth doing when close in estuary fishing is to use an old lead or stain down new leads by soaking them in vinegar. Gilts have great eyesight and will notice when something is not quite right around the bait when in clear water.

On beaches, Gilthead will take blow lug, king rag, maddies and peeler crab baits. Baits should just fill and hide the hook, but keep the hook point clear. Bream will also take razorfish, mussel and sand clam, but on the beaches worm is king.

Naturally, crab baits are most effective when fishing estuaries. Baits need be no bigger than a 50p coin and have a couple of peeled legs on the hook point to make the bait look more natural. Lug will also work, as will mussel and rag, but the latter two are not as effective in the estuary channels.

Beach Fishing: Ideal marks are smaller sandy bays with rocks and cliffs at each end. Start by fishing the ends of the beach on the new flood tide. A good tip is to fish two rods casting one out to about 100yds and the other shorter at 50yds. Note which one gets bites and adjust accordingly. You’ll find the fish stay out far enough to feel the tide run and are less likely to be tight in amongst the surf tables. Also concentrate around any areas where stones or rocks are prevalent on the beach as Gilts will visit these. Fishing close to a small freshwater stream can also be an advantage providing the stream water is running clear. On the ebb tide they usually push back out quickly but very long casts can still find the odd fish.

Estuary Fishing: This is often very close quarter fishing and you’ll be very close to fish, often just a few yards away from them and fishing shallow water over mud as they work their way through. Wear darker clothes, keep your movements to a minimum and break up your outline with natural bank growth if you can. Use light plain leads just enough to hold bottom in the tide. Bomb shapes are best, though small flat carp leads are good too, as they make minimal splash and noise when entering the water. Always hold the rod to feel for bites which can be a savage single pull round of the rod tip. Remember, these are shoal fish and competitive so bites will be fast and unexpected. Keep the rod tip low and the line deep in the water to minimise spooking them. If you hook a big bream over 3lbs or so, then you’ll need to have the drag set so that line can be given under sensible tension, just enough to slow the fish but still let it take line comfortably. They are powerful and need to be played with respect!

Landing Gilthead Bream: On beaches, you can simply slide the fish ashore using the surf tables. However, in estuaries when fishing narrow shallow creeks with higher banks, a good tip is to take a medium sized landing net with you with an extendable handle. This makes it much easier to land fish if you’re on a slippy muddy bank tight to the water and will see you land far more fish.