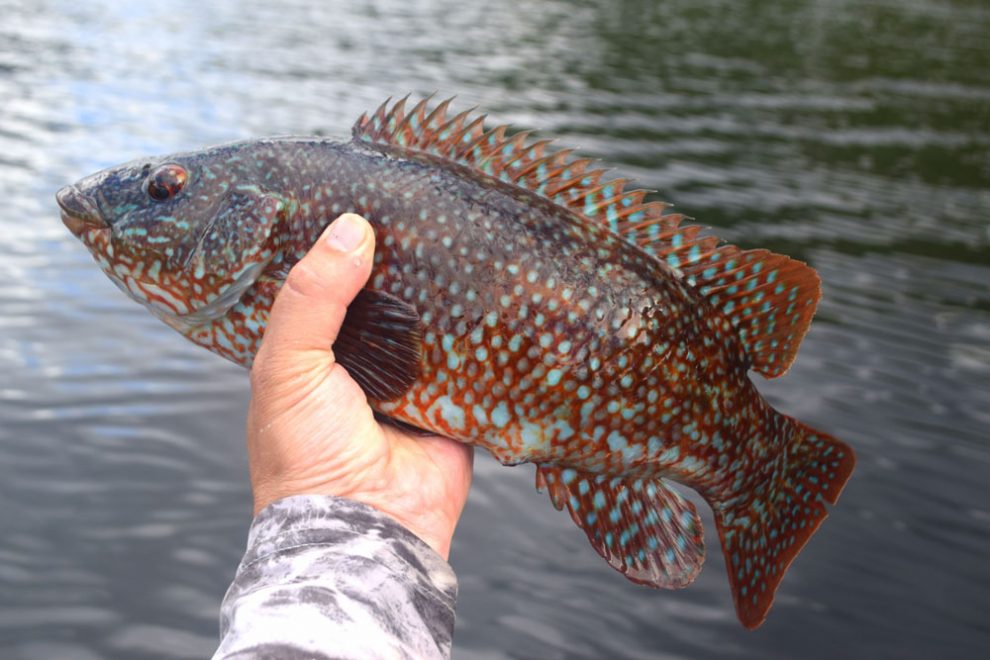 Tronixpro tronixprotronixpro1
Tronixpro Know How looks at the best methods, bait and tackle to use to catch yourself a ballan wrasse from the shore on bait.

Though ballan wrasse are caught in most months of the year, the peak period is mid-August through mid-November. This is when the wrasse show in their greatest numbers tight inshore and are at their peak condition. They are hard-fighting fish but relatively easy to target and catch.

The average size is between 1 and 2lbs, but rock ledges along the open coast and some man-made structures offer the chance of ballan wrasse to 5lbs or even bigger. Their muscular body designed to withstand surging swells makes them a formidable and sporting opponent.

Ballan wrasse are found nationwide throughout the UK and Ireland but are most prominent along the south and west coasts.

Their preferred shore habitat is the open rock ledges that give into shallow to medium depths up to 40 feet, but they will happily live in just 10 feet inside gullies that cut back deep into the cliffs. A rough ground seabed with boulders, little rock peaks, ledges and underwater cliffs is a typical home for them. They will also be found in kelp weed beds and often use the proximity of lobster pots as basic protection.

Alternative venues are stone breakwaters and jetties, and smaller ballan wrasse can be caught from around pier and jetty support legs in just a few feet of water.

It’s not just what the wrasse are happy in, weather wise, but on the rocks and breakwaters, angler safety is also paramount. That tends to be fairly settled seas with a light swell. Cloud cover gives the best fishing, but they’ll still feed during hot, bright days if you can find a bit more depth. Early morning and late evening are top times and tend to give the biggest wrasse. Providing it’s safe to fish, a heavier sea swell will often see the bigger wrasse feeding tight inshore as the swells wash crabs and small fish out of their hidey holes.

Ballans will feed most tides, whether neaps or springs. However, the stage of the tide can be important. Ballan wrasse like a little tide run, so the middle hours of the flooding tide and the middle of the ebb are always good times to fish. Some fish can be caught at slack water, but again these may be the smaller fish.

When fishing rock ledges and even breakwaters, neap tides give a more consistent depth, which can be an advantage. On a big spring tide, low water, when the water is much shallower, this can affect catches and push the bigger fish out 30-yards or more offshore where deeper water offers more sanctuary. They’ll quickly move back in as the depth increases once the new tide floods back in.

It’s important not to underestimate the powerful crash dive a wrasse makes when it feels the hook. They bore straight for the bottom. If you give line, mostly they’ll find a snag, and you’ll not get them out. Strong tackle that can literally bully a big wrasse is essential. Bass rods like the Tronixpro Banzai Bass with a fast action rated to cast 2-4ozs have the necessary power but at around 11ft 6in, also the length to reach out beyond the rock ledge or breakwater and steer fish away from potential snags.

Fixed spool reels give the most versatility allowing casting when needed and an easy, rapid drop straight down into small cutback gullies and holes in the rock ledges. Reels like the Tronixpro Xenon DV8, holding around 250m to 300m of 0.35mm, have the power and the drag systems to battle big wrasse. Load the reels with Tronixpro X8 Power Braid in 30lbs. 30 sounds heavy, but when big ballan wrasse crash dive, you’ll see why at close range, it’s a big advantage. In shallow clear water, if the wrasse bites are shy, giving just a single knock, it’s an indication they may be able to see the braid. Add a short section of 30lb Axia Fluorocarbon to give that visual separation, and you’ll see bites improve.

For ledger fishing, tie a Tronixpro 3-Way Swivel to the braid or leader. To the bottom eye of the swivel, add 12 to 18-ins of 15lb to 18lb clear mono and tie the lead weight to the end of this. The middle swivel eye takes the hook length, which should be 20 to 30lb Fluorocarbon. Mono is ok for the hook length, but ballan wrasse have sharp teeth and can easily bite through it. Fluorocarbon is a much harder material and way more difficult to chew through, plus it is less easily seen, so it is the best option. The weaker line to the lead is designed to be easily broken should the weight get snagged, which can be common. The weak link saves rigs and fish!

Hooks need to be strong, such as the Tronixpro Big Dog II in sizes 1/0 to 4/0, depending on bait size.

A top tactic in shallower water and from breakwaters is to float fish. The best floats are the cigar-shaped types (Tronixpro Loose Float) in sizes from 18g to 56g. On your main line, slide on a size 5mm bead, a cigar float, a ball-weight big enough to cock the float and another bead, then tie on a size 4 Tronixpro Rolling Swivel. To the bottom eye of the swivel, add 15-inches of 20lb Axia Fluorocarbon and the hook. Above the top bead, using a short length of Tronixpro Rig Gum, tie onto the main line a sliding stop knot using a 5-turn Grinner knot. The sliding knot can be slid up and down the line to position the float and the depth the bait fishes under the float. You can also use Tronixpro Rubber Stops for this purpose.

Ensure the float top sits no more than an inch above the sea surface to give maximum indication of a bite.

The best bait is a hardback crab hooked from under the rear belly bringing the hook point out through the top shell. Ensure the hook point is sharp and clear of the crab’s shell. Big ballan wrasse chomp through crab with their teeth, so keep baits no bigger than a 50p piece or cut bigger crabs into smaller sections.

Lug and ragworm will catch wrasse but tends to pick out the smaller fish generally. Mussel can work as will limpets, but these are baits to use only if you can’t get crab.

Bigger ballan wrasse are to some extent territorial. They live along a certain section of rocks or ledge and work it back and forth. If you miss a bite, give it 5 minutes and you’ll likely get another chance. Try repositioning the bait from time to time and lift the rod tip to lift the weight and bait up off the seabed, then drop it back. This movement will often attract a wrasse into the bait.

This patrolling habit of a certain area works in favour of float fishing. You can let the float wash around and cover more ground, ultimately seeing more fish caught. Work the float tight to the rocks, into any little gullies or holes in the ledge or cliffs, and on breakwaters tight into holes between the rocks. Wrasse will often just sit in holes but dart out to feed on any passing food.

Big wrasse are a dominant fish and push smaller wrasse away. If you’re constantly picking up small wrasse, it’s a sign there are no big fish there, and it’s wise to move.

You must always hold the rod as bites are sudden and very aggressive. Bites are typically one knock, and the rod tip buckles over. Most ballan wrasse hook themselves on the take as the line tightens. If you get a knock and nothing else, leave it for a few seconds, and you might get a second take. If not, the bait is likely gone. If you’re getting single knocks and little else, use bait elastic to tie the crab’s legs on one side of the body up the hook shank. This forces the wrasse to take the bait from the hook end and can produce more hookups.

You must bully the wrasse directly after the initial take. They will make one fast crash dive, then a secondary lesser one, which usually takes power out of them. Beware bigger fish that can get a second wind and crash dive again as they see the surface light when being retrieved.