Home » Scale Down for Success

Mark Radcliffe mark.radcliffe.9212mark_radcliffe_kayakfishing
Kayak Angler Mark Radcliffe looks at how scaling down your tackle will not only catch you more fish but a greater variety too.

Like many people I have become obsessed with my own personal species count every year.

For me it has been driven by the rise in species hunting tournaments on the kayak fishing circuit and these tournaments are something that myself and fellow Tronix team mate Martin Collison have done very well in over the last few years.

Swanage Bay is the venue for one of the biggest competitions and the days before the event give me ample opportunity to knock some of the species off my personal list. This bay is pretty unique in that all six of the main wrasse species found in the UK can be caught here, obviously the Ballan and Corkwing, but also the Goldsinney, Cuckoo, Rock Cook and the rarer Baillons wrasse all thrive over the inshore reefs.

I always prefer to tie my own rigs when targeting these fish, and the rig couldn’t be simpler. I find that a straightforward two hook paternoster works fine. A Tronixpro rolling swivel starts the rig with a hanging snap at the weight end. Hook lengths are DFC Fluorocarbon attached to small Sabpolo Wormer hooks. These are baited with small pieces of ragworm, a bait that no wrasse can resist.

Fishing from the kayak allows you to fish extremely light. Once I have found my position over the reef the Rockfish Revolution 7-28g rod coupled with the Rockfish 2000 reel and light braid is the perfect outfit. You never need more than an ounce of lead at this venue and you don’t need to cast, just drop the rig straight down, searching out all of those nooks and crannies that hold the fish. Ideally you will have anchored on the edge of a drop off or ledge and it is worth repositioning a few times until you are happy with your mark. 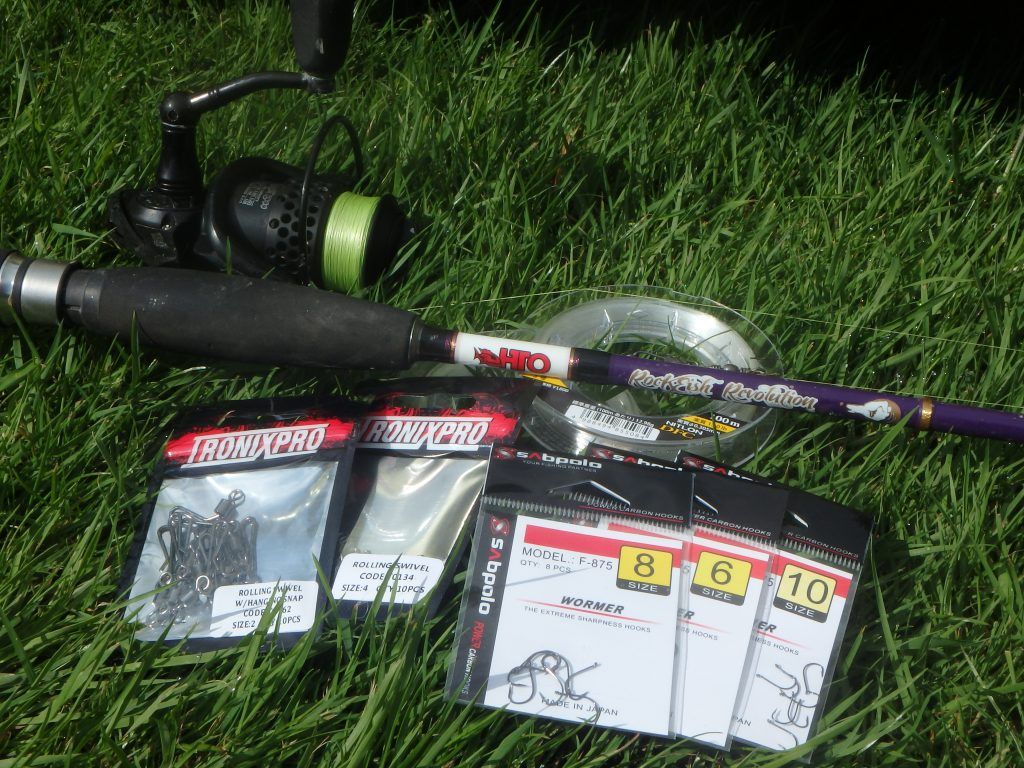 On the day in question the bites were instant, with the sensitive tip of the Rockfish allowing me to feel every nibble and pluck as the small fish ripped pieces off the worm. Within seconds the tip bent round and the first of many Ballan wrasse was putting up a spirited fight as it made its way to the surface. This was closely followed by numerous Corkwing Wrasse.

I haven’t yet found a way of targeting the different species of wrasse, separating out one from another, it is simply a case of wading your way through the ballans and corkwings until something different appears. Usually the Goldsinney is the next to appear, and today was no exception as a couple of them made an appearance, nicely lip hooked on a size 8 Sabpolo Wormer. These really are the sharpest hook I have found for this type of fishing, missed bites have become a rarity since changing to them. 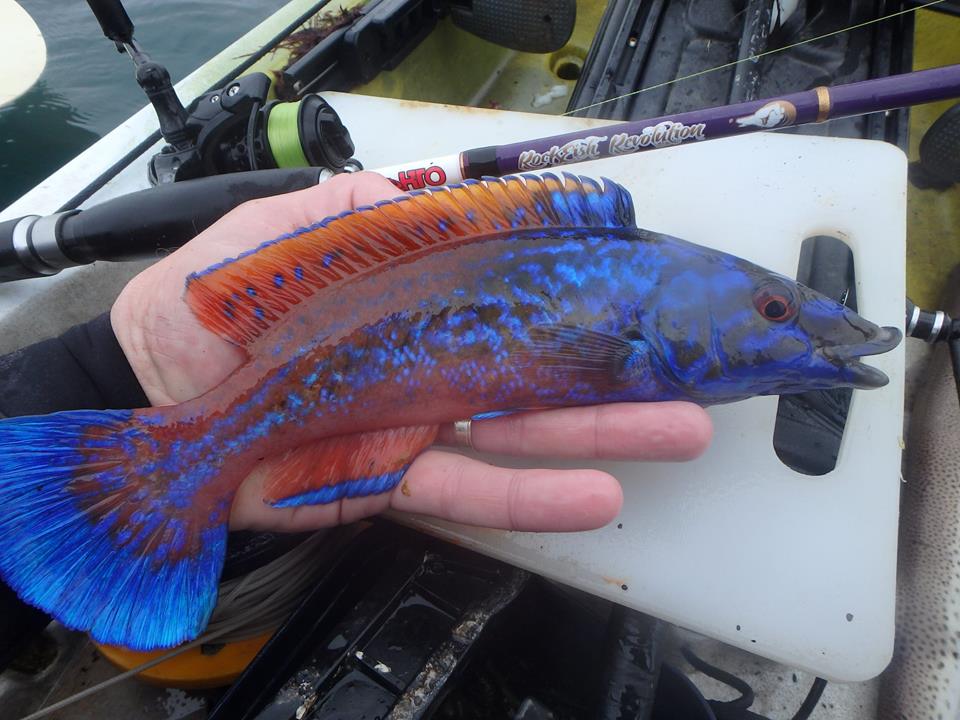 A few minutes later and there was no mistaking what was coming through the water. How these fish have come to live in the UK, I have no idea. They look much more suited to the warm waters of a tropical reef. However here it was, a lovely male cuckoo wrasse. Seeing the electric blue and bright orange of these fish always makes me smile. How can you not love catching something like this in the UK.

Anyway that was four of the six target species found, just a Baillons and a Rock Cook to go. I decided to change to a slightly larger hook, going to a size 4 Wormer and a larger worm looking for the Baillons. This didn’t deter the ballans and corkwings as they continued to inhale the bait, but shortly after there was no mistaking the pink fins of the next fish as it glided to the surface. Definitely a Baillons Wrasse. I only became aware of this species a couple of years ago and Swanage is one of the few places in the UK where they arrive in numbers to breed. Again, it is definitely a highlight of the year knocking this species off the list and after a couple of pictures it was making its way back to the depths none the worse for the experience.

Despite scaling right down on hook size and bait size the rest of the day was spent catching more of the same species, another cuckoo equally as amazing as the first and another baillon in amongst dozens of the usual species. However I couldn’t find the elusive rock cook wrasse. 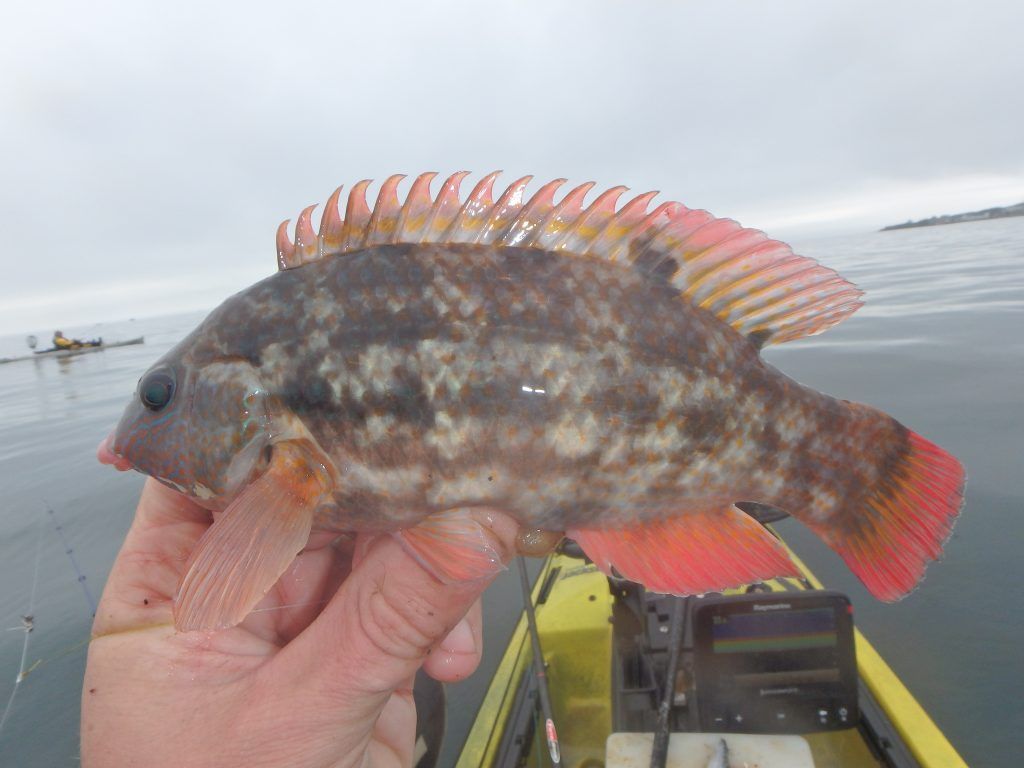 Days like this just catching fish after fish are great fun, catching five of the six wrasse species is a bonus and in amongst them are the usual small pollack, pout, blennies and the occasional black bream. How can anyone not enjoy themselves fishing light and getting a fight from every fish?

A few years ago when turning up to species competitions the majority of the kayak anglers would be seen heading out with their traditional 12lb boat rods, size 1/0 hooks and 4oz leads and wondering why they were only catching one or two fish let alone species. Now the Rockfish and Rockfish Revolution 7-28g are the go to rod for kayak anglers when targeting smaller species. The standards at these events and the number and variety of species caught has increased massively – a lot of it down to people adapting the Tronixpro and HTO LRF tackle to the specific needs of kayak fishing. The rods and reels are the perfect specifications for what we do.

There still remain a group of anglers who refuse to scale down their tackle, and then complain when they don’t do well in tournaments, and don’t catch fish. Those who are adapting their tackle and technique are catching a lot more fish and certainly having a lot more fun – if you haven’t done so already what are you waiting for? Once you try it you will love it.