If you’ve never fished for winter wreck pollack on light tackle before, you’re missing out on some of the most exciting light tackle fishing the UK has to offer. Here in my native Sussex the bass fishing keeps us busy for most of the year, as we approach the new year though, our attention turns to pollack. The south coast is littered with wrecks from both world wars and these sea bed sanctuaries hold some monster pollack! Fishing wrecks can be a surreal experience, for some reason I always try to visualise what went on the day the wreck we’re fishing over went down. It can be an eerie feeling, especially when the fog stars to lay down. A percentage of wrecks we fish are either broken up or covered in commercial fishing gear but most hold some seriously big fish.

Pollack are the gangsters of wreck land, known for their explosive hit and runs and on light gear, when they hit, the hit like an express train. The current British record pollack stands at an incredible 29lb 4oz, caught off Kent in 1986. The English Channel still surrenders a few twenty pound plus fish each year, but these are mostly on snaggy wrecks, so it can be a real tussle to get them out without getting smashed up, as with everything, you take your chances. 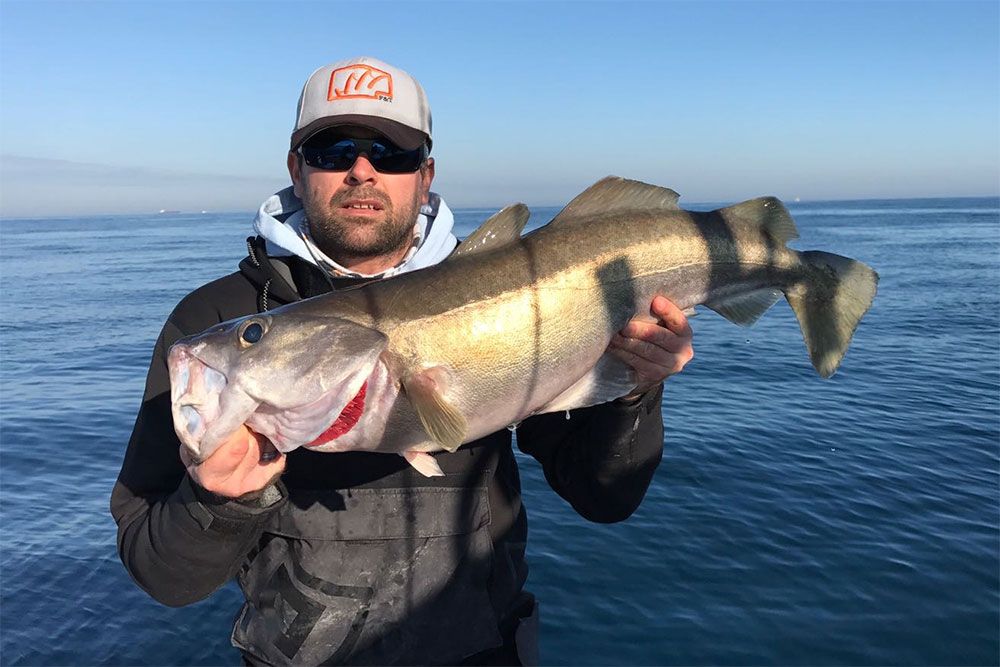 For many years (and still to this day) your typical winter wreck pollack gear would be an 8’6 to 9’’ uptide rod with a 6000/7000 sized multiplier reel loaded with 30lb braid and a flying collar set up. The Flying C as we call it consists of a boom, lead and longish leader, with a sidewinder or redgill attached to the end. There is no doubt this setup has caught stacks of fish but, it’s seriously overkill as to what can be used for the same situation.

When I’m fishing for winter wreck pollack with soft plastics my kit consists of an 8’ Hart Offshore Evo paired with a 3500H Daiwa Saltiga reel. This is loaded with YGK G-Soul WX8 PE 1.2 (20lbs) line with a leader of 6 to 8ft of 20lbs YGK Nitlon DFC Fluorocarbon. Braid is essential and the YGK WX8 like many modern braids is extremely thin causing less drag in the water allowing you to fish much lighter. The leader is added for two reasons. Firstly, braid has zero stretch so a length of leader will act as a shock absorber when a big fish hits hard and starts to run. Secondly, when fishing at close quarters to snaggy areas, modern braids can fray when coming into contact with sharp edges and damage easy. The fluorocarbon leader helps to eliminate that problem. 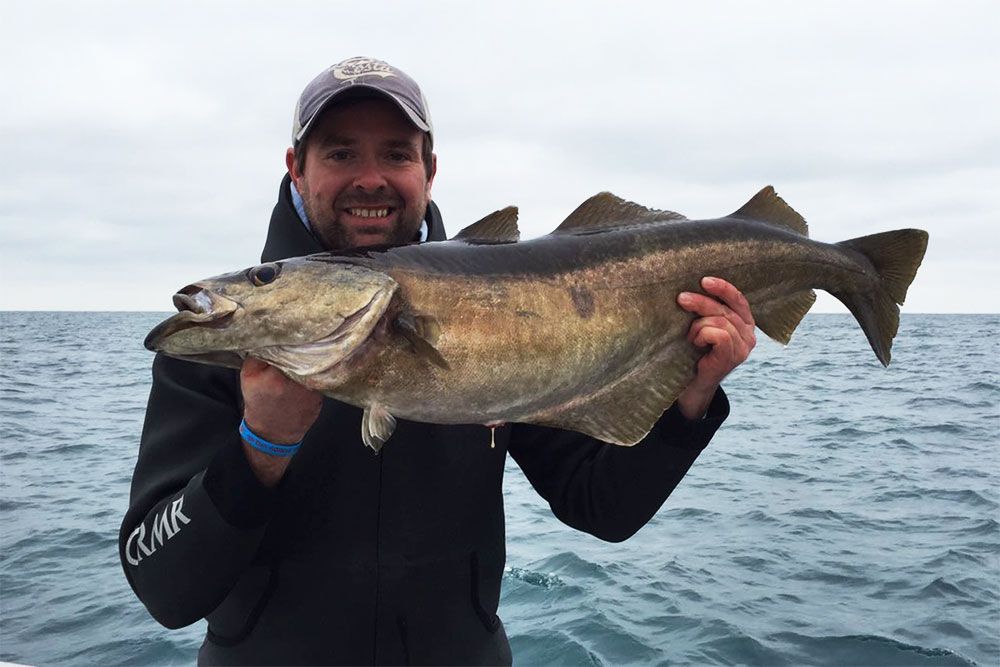 The Hart Offshore Evo is rated from 15 to 60g and has a lovely action which bends into fish well but, more important than that, this action won’t rip hooks out of fish as they crash dive. As I’ve mentioned before, big pollack hit hard so it’s vitally important that you set the drag up correctly. Whilst we all love the sound of a screamer, these fish will happily hit you 30 feet above a wreck and take you all the way back down before you can adjust your drag. These big girls are tough customers so make sure your drag is set properly at all times.

In addition to my usual winter wreck pollack kit, I will also carry a slow jigging outfit with me as something else to try on the day. I’ll be writing more about this setup in a future blog.

We use a whole host of lures when targeting winter wreck pollack, the most important factor is making sure you have a wide range of different weight lures to cover all situations. Glassy, flat calm seas are rare so you have to have all of your bases covered.

The HTO Artic Eel has accounted for some seriously big winter wreck pollack since its release two years ago. At 56g it is fairly light, so to fish it on its own the drift speed needs to be under a knot for it to reach the bottom in time for you to retrieve it back up over the wreck structure. If you find the drift speeds are faster, you can add a small drilled bullet which will sit directly on top of the jighead. This will get it straight down to the bottom. The HTO Artic Eel comes in seven fishy colours and they all seem to work as good as each other. 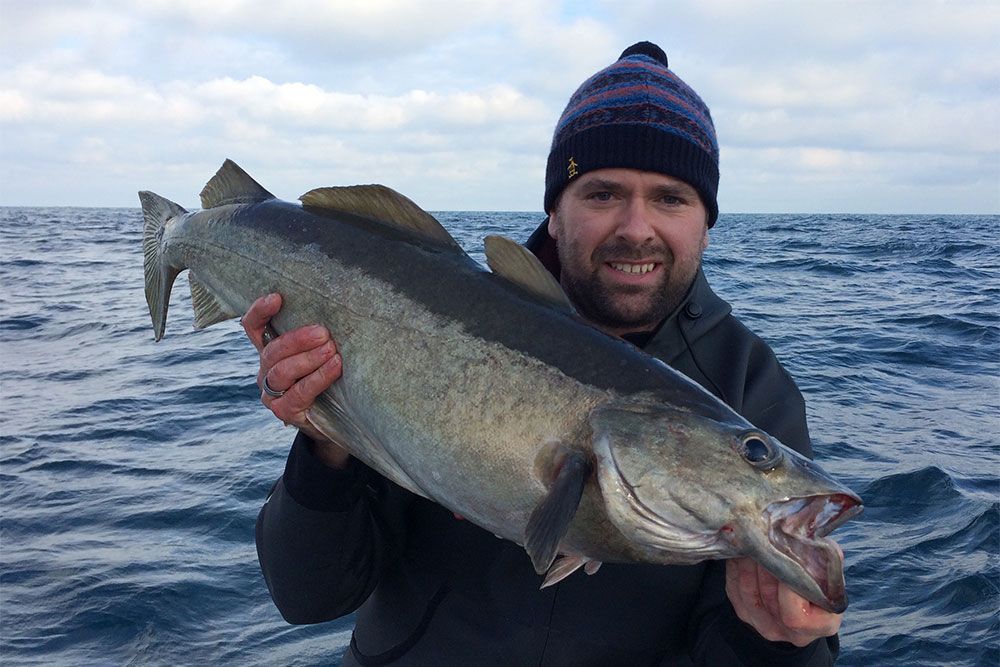 Westin Slim Jims are mentioned a lot when it comes to cod or pollack fishing and for a very good reason! They come in two sizes but the main one I like to use is the 175mm 85g model. Westin designed these to be tough, but when you think about the size of the fish they target over in Norway, Iceland etc. lures need to be! In the pack comes both a paddle and curly tail, and they have both scored well on their day, the stated hook size is 3/0 but they are more like a 5/0.

I will also carry in my lure bag a variation of lures from other manufactures such as Fiiish, Xorus and Ultimate Fishing – giving yourself options to bring more bites on the day.

When you arrive at the chosen wreck the skipper will do a dummy drift to see how the boat is going to drift given the conditions. When you’re about to fish the first thing you need to remember is that you’re not fishing a Flying C here, there is no big old lead weight bounding around, you’re tied directly to the lure…it’s just you and the fish.

When the skipper signals that you can start to fish you open the bail arm and let the lure sink to the kill zone. The skipper will have placed you uptide of the wreck so you drift down over the top and down the back of it. The key here is to close the bail arm and start the retrieve as soon as you hit bottom, making sure you count every turn of the handle. This is vital as it gives you the indication of where the action is happening resulting in more fish. 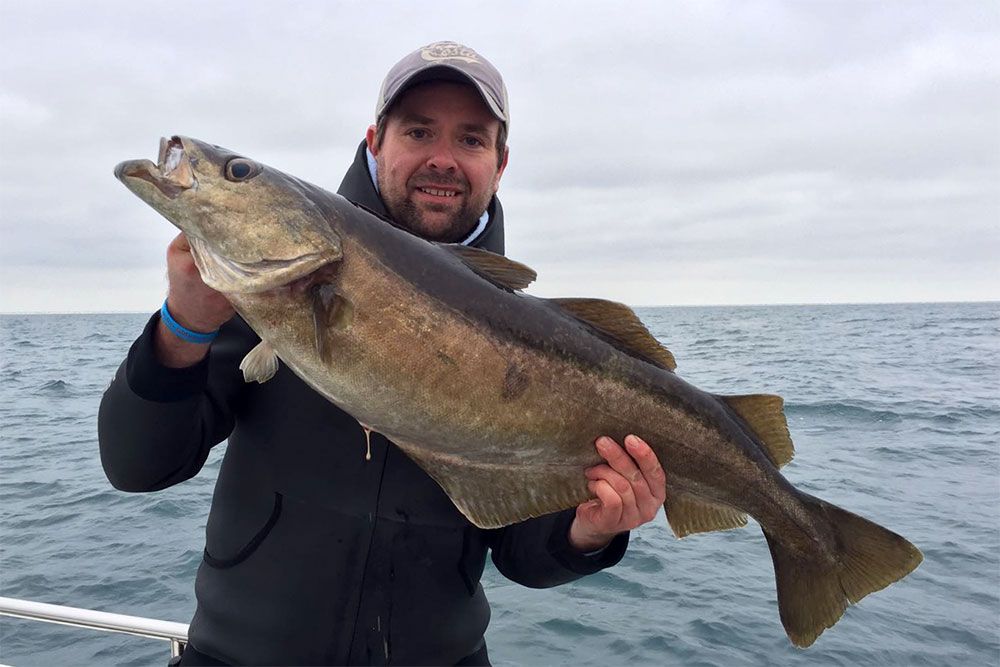 You may find that you’re getting plucks on the lure from pollack as they show interest in the lure, the key is to be patient and not strike these, just keep retrieving until the rod buckles over. There is no mistaking a full force take by a pollack, even small fish will give the rod a good whack. There are days when pollack like to chase, they love the lure retrieved fast and when this is the situation you need to really hold onto your rod! The hits can be incredible and ferocious and you need to be prepared. On other days when fish are slow and lethargic a slow and steady retrieve can usually tempt a few hits. It’s all about what’s happening on the day, so always be prepared to switch things around to make the most of any opportunity.

RELEASE THEM IF YOU CAN

Pollack in general are prone to blown swim bladders, sometimes this can’t be avoided however, it’s not a race when you bring them up from the depths. If you take your time they can be returned with no issue at all. There are a few good venting tools on the market which will deflate the bladders to aid the return of the fish, however this can keep for a blog another day.

Pete Cook grew up living by the sea and from a very young age, he always had huge enthusiasm for rock pooling and wading around trying to find basically anything which moved. Pete is an exceptional lure angler who specialises in bass fishing.