Spinning for mullet is a method I have only tried a few times but each occasion has resulted in fish.

I am by no means an expert on it, I’m still learning little tricks every time I try, but it’s something I get asked about often and my posts on mullet always result in the same questions being asked (indeed the same questions I was asking a few years ago) so I thought I would pass on the basic information that I know.

I grew up on the Lincolnshire Coast and spent many a summer day following and fishing for the shadowy mullet as they cruised up and down the muddy creeks following the tide. I never managed to get one to look at my bait, let alone eat it and it wasn’t until my teens on a regular holiday in Devon that a family friend took me mullet fishing properly, resulting in several hard fighting thick lipped mullet from the open sea at Hopes Nose. However, these fish were caught on float fishing tactics with maggots being trotted out into the ocean, not on spinners and lures.

I’m sure the fish I saw when I was younger were thin lipped mullet, not thick lipped and it was during a kayak fishing competition in Christchurch Harbour that I first targeted this fish intentionally and since then I’ve been hooked.

Most of the people who ask me about rigs for this seem to try and overcomplicate them. I have a box of assorted mepps and other spinners that I have cut the treble hooks from. Then the only other things needed are a few spools of fluorocarbon, my preferred choice being the Nitlon DFC 8lb and some Sabpolo Wormer hooks, my preferred size being the 8’s and 10’s.

It’s best tying the rig before attaching it to the spinner – so I take a length of the fluorocarbon and tie a knotless knot to the larger of the hooks about three inches down the line. With the length left below the hook you can simply tie the smaller hook leaving whatever length you wish between the two hooks giving a pennel rig. I prefer to leave around three inches between the hooks. Now you can tie the top end to the spinner and the rig is ready.

As with most of my light kayak fishing, salt water or fresh I use the HTO Rockfish Revolution 7-28g rod and the Rockfish 2000 Reel. I use this combination for pretty much everything from light bait to lure fishing. It’s an incredibly sensitive rod but has enough backbone to bully and land decent fish when needed and I’ve comfortably landed double figure pike, chub to 6lbs as well as big wrasse and smoothhound with it.  A length of around 5ft of the Nitlon DFC fluorocarbon is attached to the braid before the spinner is added and you’re ready to go. 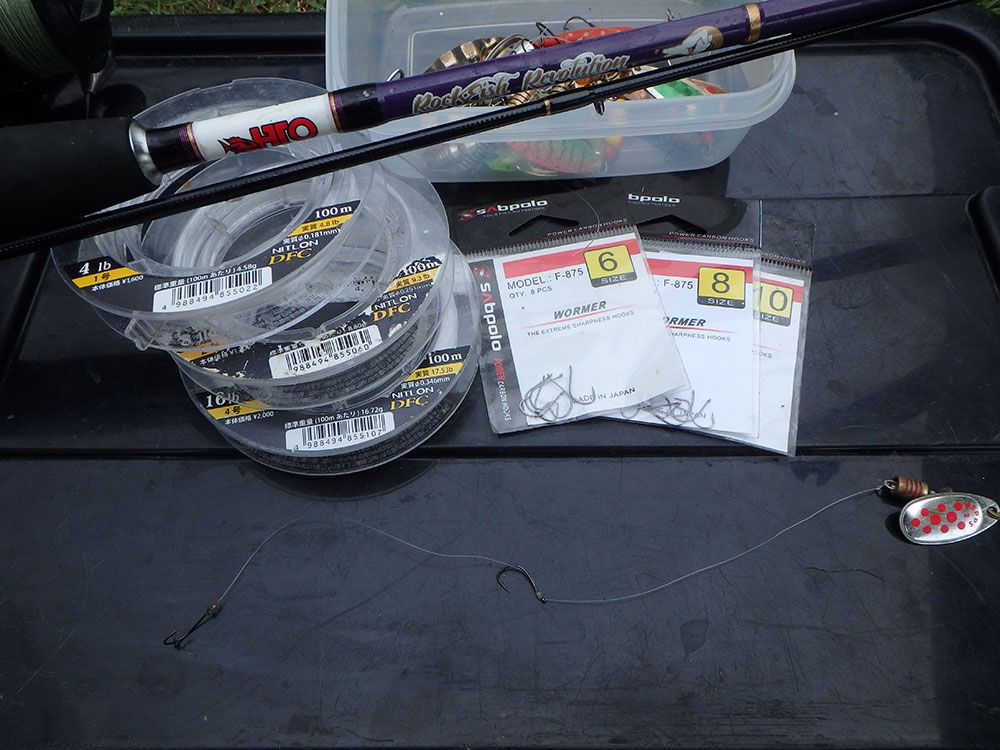 I think the most important aspect to this style of fishing is the presentation of the worm below. I know a lot of people who use Isome Worms with great success and I always carry a few packs as back up but I don’t think you can beat fresh ragworm presented behind the spinner. This is perhaps the most difficult part of this style of fishing. Threading a live ragworm over a small hook and up the line is no mean feat, especially getting it to remain completely straight. It is important that the final hook comes out precisely at the end of the worm, otherwise you will constantly be feeling plucks where the fish are nipping the worm as it moves through the water, but not hooking up.

Kayak fishing lends itself brilliantly to fishing for thin lipped mullet because you can access areas unfishable from the bank. Every creek and estuary in the south is full of these fish in the summer and paddling along bits of water that you know have never been fished is a constant joy. Last week I was in Devon and on a day that the wind didn’t allow a sea launch a few of us set out to explore a local estuary on our kayaks.

It was soon apparent that there were fish everywhere as mullet were constantly breaking the surface in front of the yak as I cruised along. I knew some of them would be thick lipped but expected thin’s as well. Soon enough after anchoring along a deeper pool I was getting small taps on retrieving the lure. It can be frustrating as the fish will follow the spinner right to the side of the yak before turning away at the last minute, but by changing the size and colour of the spinner and the speed of the retrieve you can usually tempt them to take a proper bite and when they do you soon know about it. Just by looking at the tail you can tell that these are going to be a hard fighting fish and when you hook one you won’t be disappointed, especially on the balanced set up of the HTO Rockfish combination 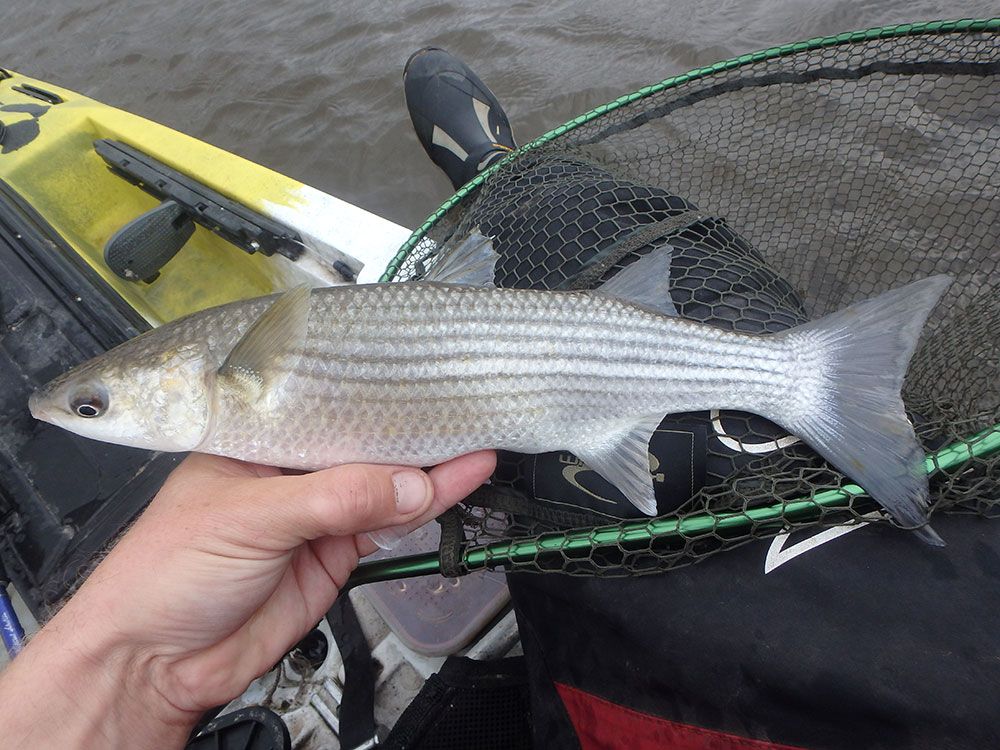 Amongst the mullet you will invariably catch other species as well with school bass becoming something of a nuisance and plump flounders offering a welcome change. On our session last week, I had a couple of hard fighting thin lipped mullet, nothing of any size but great fun. However on looking back at my pictures when I got home I noticed that one of the fish had large golden blobs on both gill covers and along the back – it looked like I had caught my first golden grey mullet as well, something I had tried for a couple of times this year on Welsh surf beaches with no success so I was over the moon. It’s definitely an estuary I’ll be going back to explore some more. 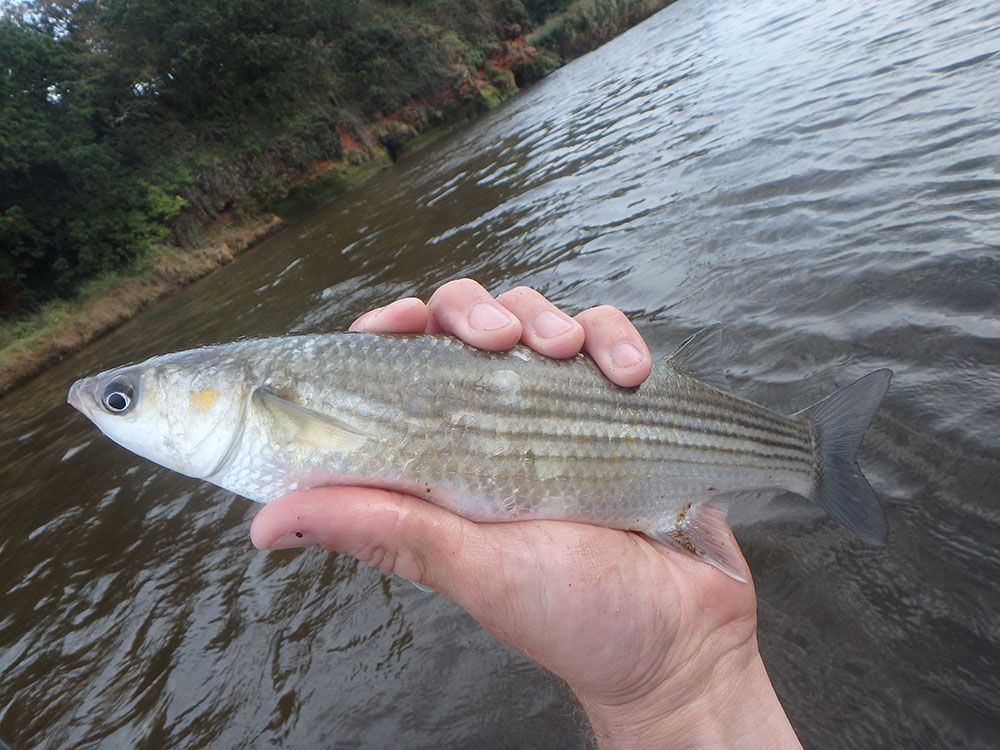 It’s a commonly heard thing amongst anglers that mullet of any type are difficult, if not impossible to target – but don’t be put off. They are incredibly widespread with most people having them somewhere nearby to target. You only need some basic bits of tackle to target them and I can guarantee once you hook your first one you will definitely be back for more.