It's that time of year again when the major kayak fishing competitions start, with the Hobie Swanage Classic being one of the first, held over the weekend of the 21st of May 2016. The format for this competition is a catch, photo and release species competition. The aim, to catch as many species as possible in the designated fishing area in the allotted time of the competition. This event has been a challenge for me over the past few years, often making the wrong decisions on the competition days which cost me dear. This year I wanted to make sure I was prepared, putting in the effort before hand to give me the best chance of success on the day of the competition.

The two days leading up to the competition saw unfavourable weather, with high winds and gusts dominating the chart, it was difficult to work out if our normal fishing grounds in this competition would be within the designated fishing area. As we approached competition day this was confirmed. At the safety briefing a clear set of boundaries had been drawn to make sure anglers could compete safely in the event. These boundary changes meant I had to change my game plan as the bigger fish would be out of bounds on the sand, meaning I'd have to concentrate on the mini species over the reef. To give me the best possible chance of fishing in these conditions I chose to use two Rockfish Revolution 7-28g rods, one with a 3 hook flapper rig and the other with a set of Tronixpro Sabikis. A third rod would also be needed, a Hart Absolut Spin kitted out with a Tronixpro Float, ready for targeting garfish.

The set up for my 3 hook flapper rigs consists of DFC Fluorocarbon in 16lbs for the rig body and DFC Fluorocarbon in 8lbs for the snoods, attached to which I use a Sabpolo Wormer Hook in varying sizes. I like to use the Tronixpro Quick Rigs as this allows me to adjust the swivels up and down the rig body allowing me to change the setup from a standard flapper to a two up, one down rig quickly. 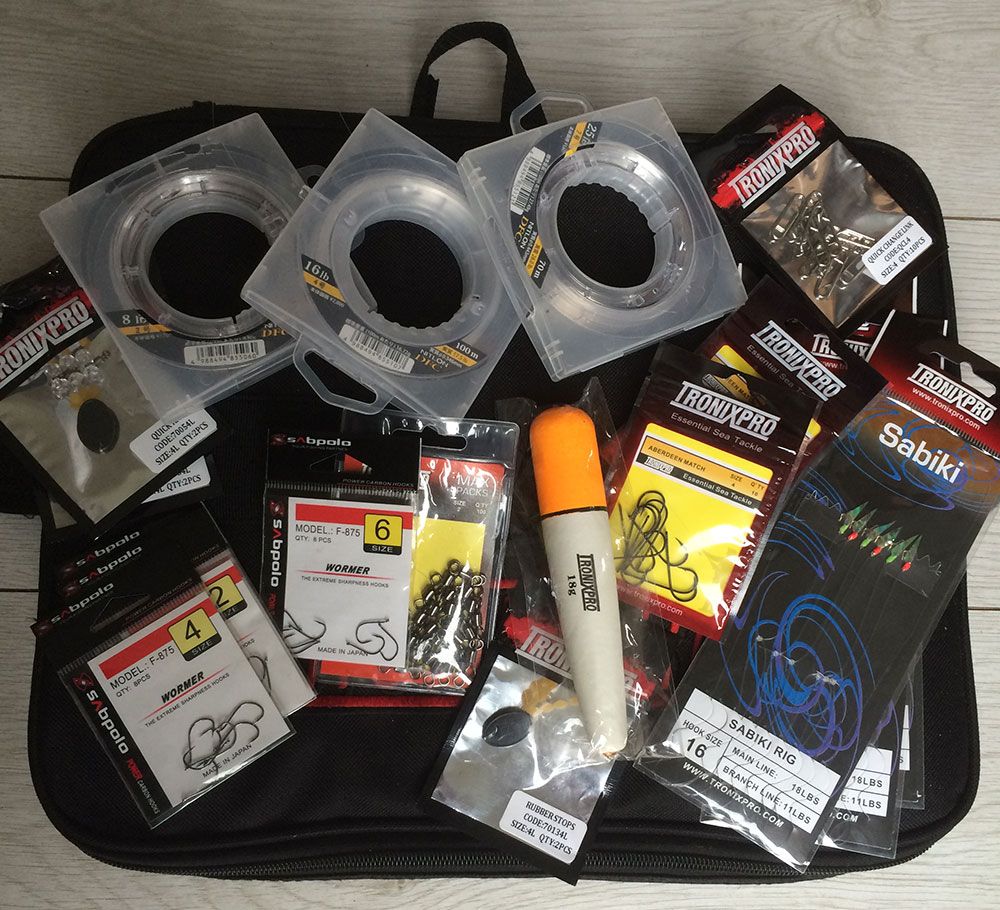 My float set up is very simple with the rubber stop, Tronixpro Float, ball lead and DFC Fluorocarbon in 8lbs with a size 4 Aberdeen match hook attached.

Considering the weather conditions, 92 kayak anglers descended on Swanage to take part in this years Classic. Once the all the kayaks were launched we all waited in eager anticipation for the fog horn to go, which would signal the start of the competition.

My plan was to find a nice hole or gully on the reef, I found on which had a nice 2ft ledge. I started off fishing with the Hart Absolute Spin hoping for a garfish on the float ,I used a sliver of belly section from a mackerel on a size 4 Aberdeen. On my other rod, the Rockfish Revolution, I used a 3 hook flapper rig baited with small sections of rag, squid and peeler crab on Sabpolo Wormer Hooks size 6/8s. It didn't take long for the float to move and a garfish was on. Species number one! Soon followed on the Rockfish Revolution was a nice 3lb ballan wrasse then a corkwing, then a ballions wrasse. Fish were coming in thick and fast but mainly ballans and corkwings around 12/18cms size.

At this stage I was only fishing one rod, as fishing two over the mixed ground would of seen me spending more time un-snagging myself from the bottom, so one rod was the way forward for me, allowing me to stay in contact at all times with the rod and feel every indication from the fish. That is what I love about fishing with the Rockfish Revolution, they have a light tip and are very sensitive, making them ideal for fishing with bait. I generally only use a 3 or 4oz lead on my rigs, which the Revolution can handle fine when down tiding. After wading through wrasse after wrasse I was pleasantly surprised when another new species came aboard, a poor cod which was soon followed by a small pollack. Following those captures I enticed a black bream aboard. 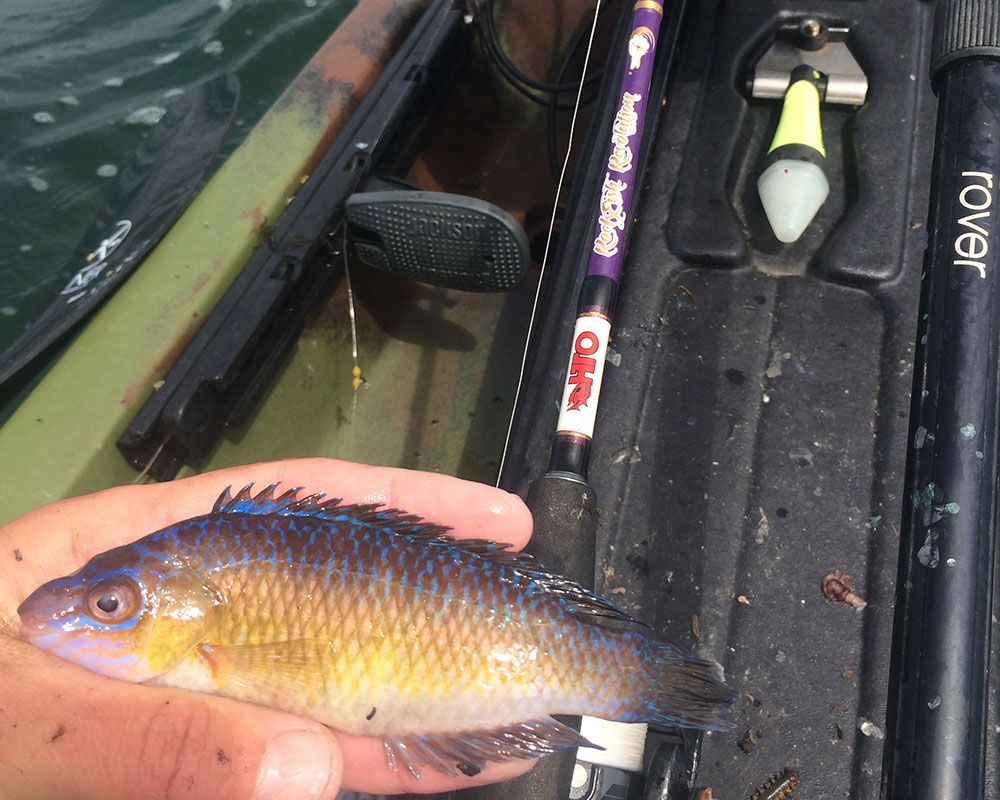 In amongst this action I was getting some tentative bites that were proving tricky to connect with, to try and find out what these fish were I dropped down to a set of Tronixpro Sabiki's with sized 16 hooks on, tipped with a small piece of ragworm. With the first drop it was apparent that these were tiny wrasse, I pulled up 3 corkwing wrasse which were the size of my little finger! As I continued fishing I pulled up three rock cook wrasse in quick succession, a nice surprise and another species to add to my tally. I was now on eight species but still missing some attainable targets such as a tompot blenny and a dogfish. I stuck it out for another hour battle through the same stock of species until I decided it was time to have a go for a dogfish or a flatfish. Unfortunately my anchor had snagged badly and it wouldn't budge, meaning I had to cut it free and head to the shore. 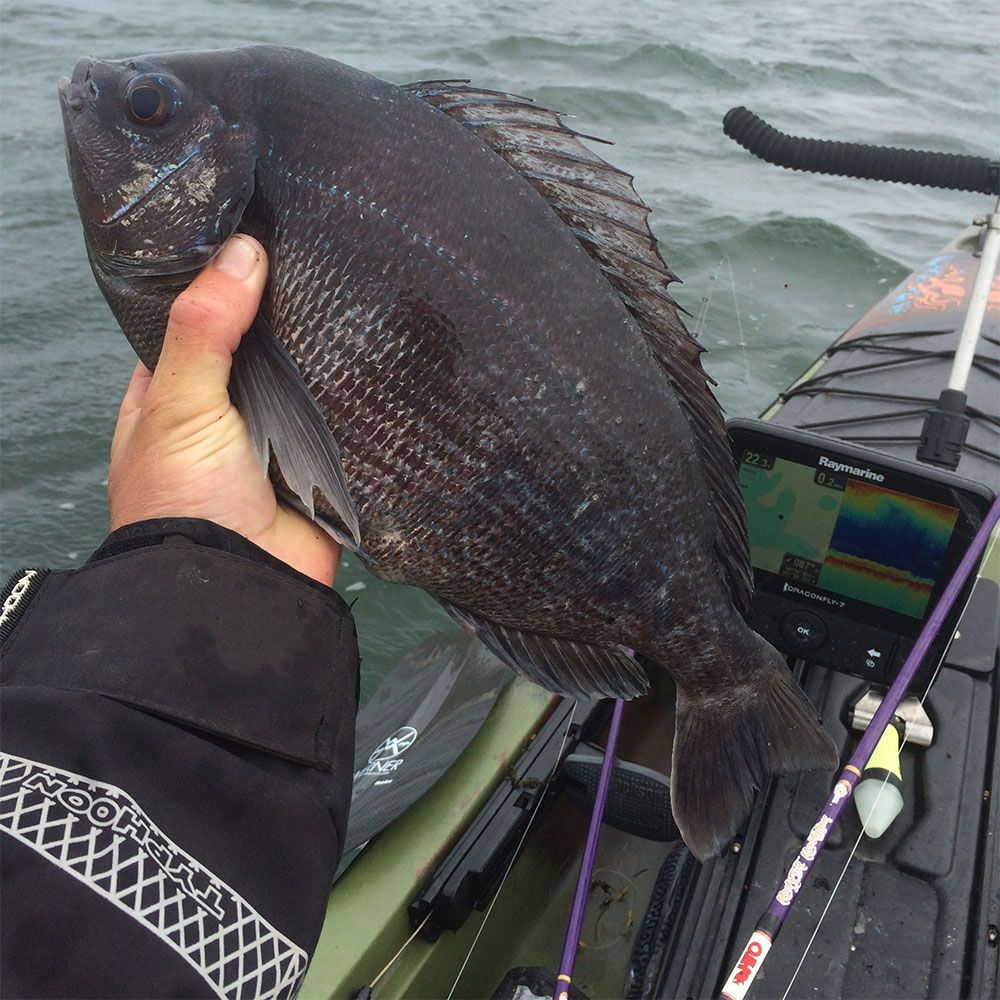 As soon as I reached back into shore fellow team member Mark Radcliffe had already registered and had seven species, he'd also had his session cut down due to problems with his anchor trolley. Once I had registered, I was in first place, but with an hour and a half to go, would I still stay there?

It was a long wait but it was soon apparent that eight would be enough to take first place with Mark coming second with 7 species.

It has been one of my goals for a long time to win this tournament and after winning Oxwich last year this was the icing on the cake for me. First prize was a brand new Hobie Revolution 16 which I was ecstatic about as I was looking to purchase one of these later this year. 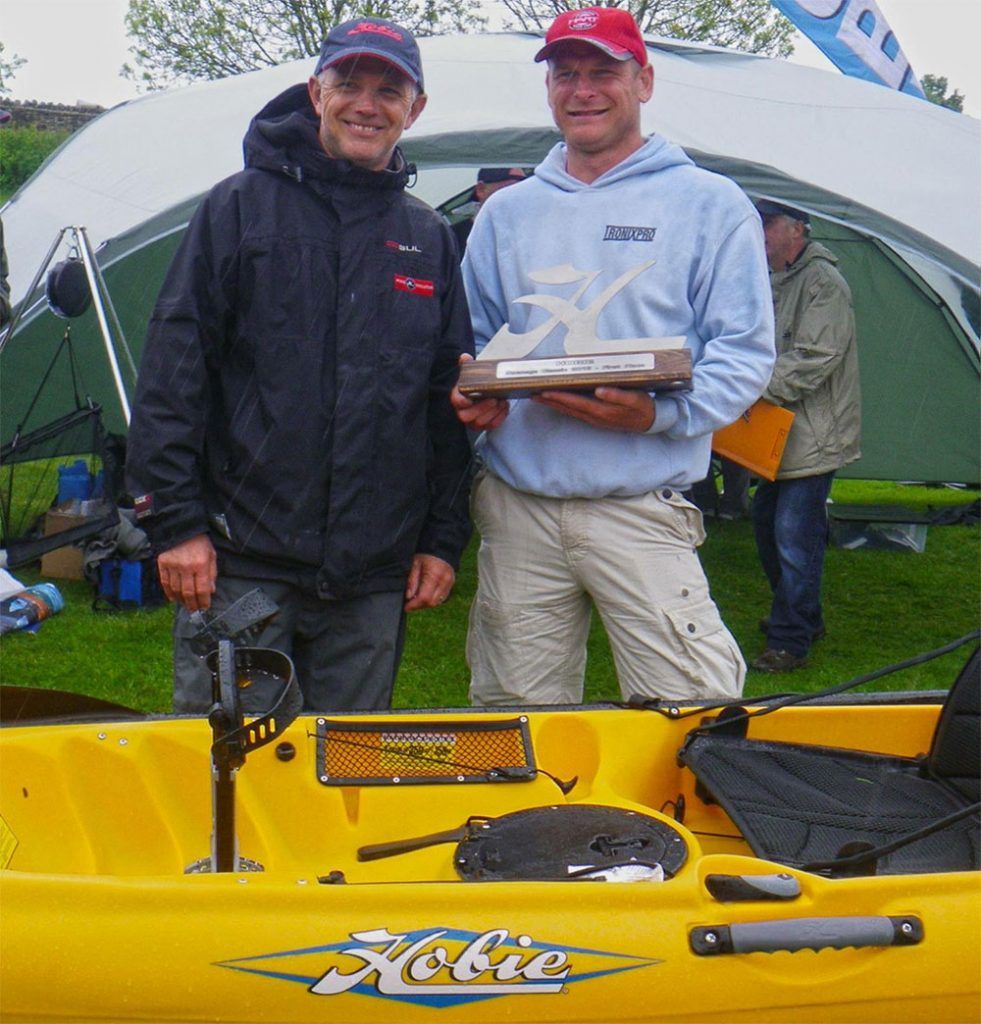 A massive thanks to all the organisers and sponsors, as without them, these events and competitions would not be run. Tight lines….

Martin Collison has been coarse and salt fishing for nearly 25 years since the age of 6, due to his father being a keen angler. In recent times, Martin has found a soft spot for kayak fishing and fishes numerous competitions around the UK.