Lee Goddard lee.a.goddard.5l_g_fishing
Lee Goddard looks back on a day fishing the Llyn Peninsular that demonstrates a clear knowledge of fish behaviour gives you an advantage when fishing light game.

Fishing Light Game lures at distance isn’t something many think is at all necessary and indeed a great deal of the time fish can be found right at your feet, especially if you fish harbour areas with a heavy structure close in. However, when you are setting out to target a specific species instead of general catches things can sometimes be a little more challenging, especially during variations in tidal movement, Monday was a classic example.

I decided to head up to the North Llyn Peninsula here in North Wales to a mark I know reasonably well, the day was bright and hot with a fairly decent tide of around 5 meters. Though there is a lot of ground to fish, I chose a rocky outcrop where the tide rips off of the headland and creates some nice back eddies where food is stirred up from the seabed. Due to the increased beach and coast traffic this time of year and the speed of flow, I knew the fish would be further out and deep. It is generally the case that the faster the current, the deeper the fish!

There are perhaps a few ways you can approach such a mark, Caro or mini bombarda fishing would be one way, but the method I chose was tiny shore jigs. I do like the minimal fuss of fishing jigs, no need for swivels and beads and other paraphernalia, just a #00 clip at the business end and a jig of your choice. This way I can change weight as the tide state changes and colour depending on what the fish fancy, I can also easily swap to a jighead and soft plastic if need be.

My first choice was our 7g HTO shore jig as I had arrived just about at high water and walloped it out as far as I could and free spooled to the seabed. I could feel the current start to lift the jig slightly and bump the bottom so I jerked my rod up with about a foot movement in the tip and bang! Fish on first cast. 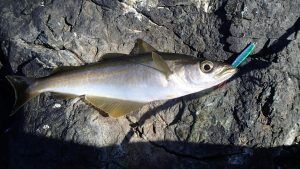 Tidy and the fish were exactly where I had suspected!

Second cast I placed my jig in roughly the same area and as my jig hit the bed and started to drift, I got another pull and another fish on. 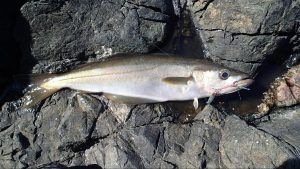 On my third cast I didn’t actually get a take, which allowed me to cover the ground as I worked the jig and again my thoughts were confirmed, there were no actively feeding fish closer in, they were all sitting on the edge of the rip.

For about an hour the same activity continued with a similar ratio of casts to fish landed, pretty good fun. I do enjoy taking fish at range as it allows for a much better fight often. None of the fish were especially big but they were quite spirited in the fast current.

Another thing that was quite exciting for me this day; I caught two Ballan Wrasse on jigs, something I had heard of but never achieved myself before. 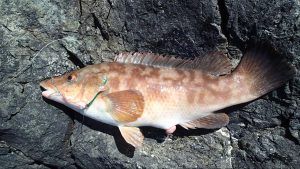 I do so like catching Wrasse and seeing as they were active with the tide now receding I had a momentary switch to weedless rigged HTO mini sticks in Margarita. As anyone knows, Mini sticks and Mini shads are a firm favourite of mine for Light Game Wrassing, the Ayu and Margarita colours are especially productive.

Anyway, fishing closer in among the slacker waster I was able to tempt some small Wrasse to take the bait, this one being the largest and most spirited; 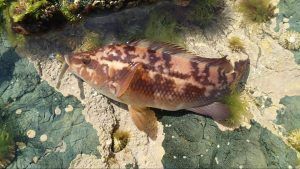 During this period of fun activity, I was unfortunately joined by a load of coasteerers who were clambering far too close to my rod tip when I was landing fish for my liking and also jumping in the water close to my swim so I decided to head to the pub for lunch.

On my return the tide was now ebbing into low and there was no need to use a 7g jig any longer, so I switched to our 5g jig in shirasu silver and once again this proved popular with the Pollock. I found at this time I had to make the jig dance a bit more but twitching the lure through the column and letting it fall close to the kelp to get a take, but once figured a succession of small Pollock came. 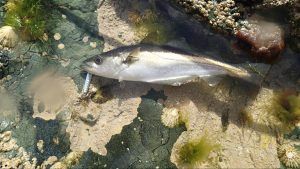 Unfortunately I lost both my HTO Shore jigs due to getting rather closer to the Kelp than I should have. I continued catching on other jigs and overall I lost count of how many fish I had, it was a fun day indeed and showed that time spent out and studying fish behaviour really does pay off.

Lee Goddard is an avid angler including coarse, traditional sea angling and lure angling both in freshwater and saltwater.