Mark Radcliffe mark.radcliffe.9212mark_radcliffe_kayakfishing
Mark Radcliffe continues his year round species hunt into April, this month Mark heads to Swanage and Devon in the hope of significantly increasing his species tally.

Spring is in the air and that means heading out to one of my favourite and most productive species hunting venues, Swanage, in search of ray and wrasse.

This sheltered bay offers fantastic kayak fishing with a wide variety of species available. With an inshore reef running parallel to the shore, then a quick drop off onto sandy banks, you never know what is going to turn up. The annual Swanage Bay Kayak fishing comp regularly produces more than 25 species on the day, so it’s a wonderful place to really get the species count ticking over. 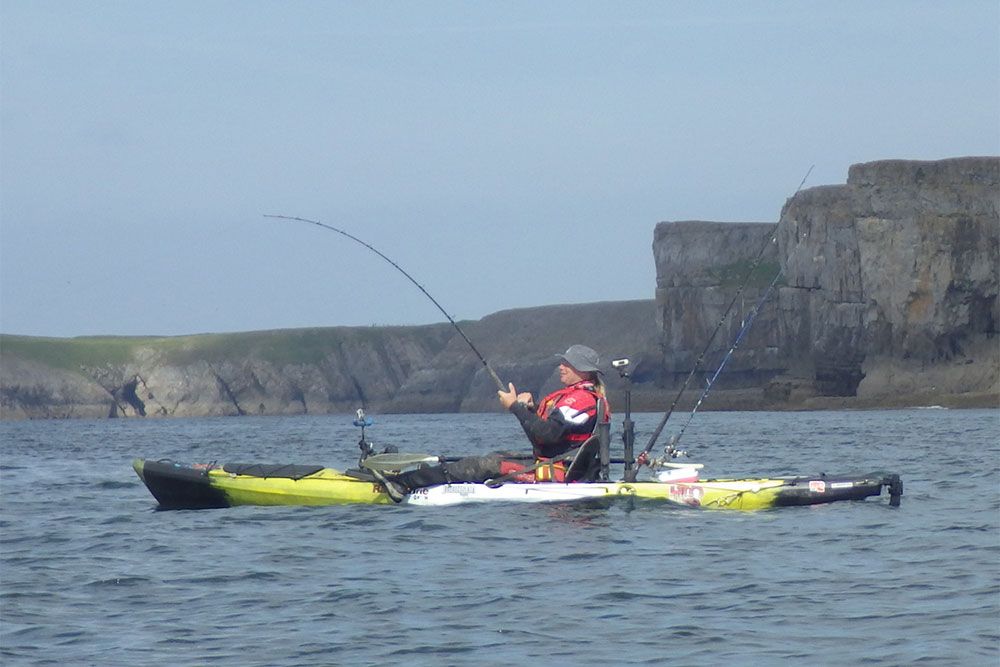 My first session this month was for ray. The target was to get three species off the list, small eyed, undulate and spotted. The set up would be the same for each species, but baits would be varied between sandeel and mackerel as the undulates tend to prefer a fish bait, whilst the other two usually come to the sandeel.

The rigs couldn’t be simpler, just a straightforward running ledger. There is little tide here so no need to fish too heavy. The mainline is simply passed through a Tronixpro Zip Slider, then through a bead just to protect the knot. It is then tied to a Tronixpro Rolling Swivel and on the other end the hook length is attached. I use a trace of 25lb mono with a 2/0 hook on the end.  As mentioned, the bait is a whole sandeel or a large piece of mackerel fillet whipped neatly onto the hook with Tronixpro Baitex in medium. Whipping it to the hook helps keep the bait well-presented and the hook point clear, as well as stopping the ever-present dogfish ripping it off the hook quite so easily.

This session it didn’t take long for the dogfish to find the bait and I was soon unhooking a steady succession of them. It is always worth checking the line just above the hook after catching dogfish because the combination of their rasping teeth and rough skin can soon cause abrasions on the line, and you don’t want it weakened when the ray appear.  Soon enough I had a very different bite on a sandeel bait, a couple of definite nods on the rod and then the fish began to swim away….. ray on.

After a spirited fight the first of seven small eyed ray for the session was in the net. As with many of the small eyed ray I catch here this one was half way through laying its eggs with one of the purses hanging out of its vent. I’m always amazed how they just seem to carry on going about their usual business as they lay these eggs along the sea bed.

I was continuing to catch small eyed ray and dogfish on sandeel so decided that a change was needed. By making a cocktail bait of mackerel and sandeel I instantly had a different species of ray, the spotted. Usually these are here in abundance but today this was the only one of these pretty fish that I caught. 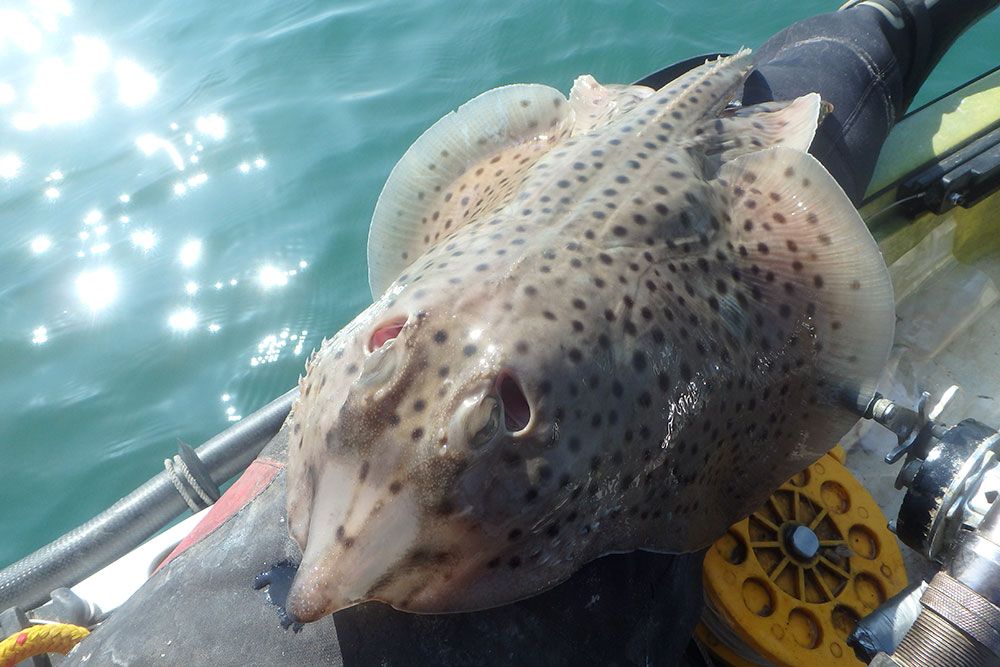 Having already caught two of the target species I decided to go all out for an undulate. The hook size was stepped up to a 4/0 and a whole side of mackerel whipped to the hook. It didn’t take long to get the usual dogfish interest, but again within half an hour I was attached to something much larger that didn’t want to come to the surface. It had to be an undulate.

Once it was in the net I tried to get some decent pictures for the local conservation project who are trying to track these amazing looking fish through anglers catches and their distinct markings. Pictures done it was time to let it glide back to the depths. After catching my second of the species twenty minutes later I decided it was time for a change and headed over to the reef in search of some different species of wrasse. 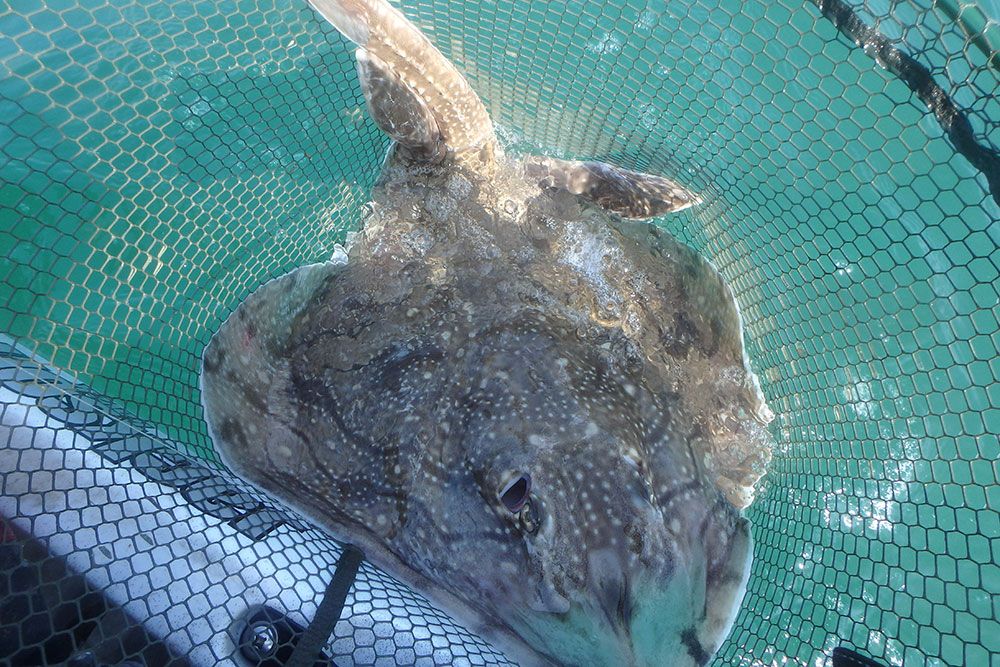 Light fishing over rough ground continues to be one of my favourite fishing activities. You just never know what is going to come up next. Granted nine times out of ten it is a ballan or corkwing wrasse, but it is always a thrill when you see a different shape or colour of fish coming through the depths towards you. As always the chosen rod is the HTO Rockfish Revolution 7-28g coupled with the HTO Rockfish Reel.

This is rough ground fishing and you are going to lose gear, so I like to tie my own very simple very cheap rigs. It is essentially a two hook paternoster. 15lb line is attached to a Tronixpro Rolling Swivel and two blood loops are tied in the line giving a simple boom effect just to keep the hooklength away from the mainline. On the bottom a Tronixpro hanging snap swivel is attached as a quick and easy way to change the weight depending on tide. The hook length is 8lb Nitlon DFC Flurocarbon and the hooks are Sabpolo Wormers. I’d start with a size 6 and change up or down depending on what I am targeting.

Bait is usually bits of ragworm and there is no need to cast as you will just end up getting snagged. Simply lower it to the bottom and wait for the fish to find the bait. In Swanage that is usually less than a few minutes and soon enough ballan and corkwing wrasse were coming to the yak in numbers. To find species here it is simply a case of wading through the bigger wrasse until a smaller species gets an opportunity to attack the bait. First off the mark was a Goldsinney, followed by a couple of pollock and small pout. I decided to let out a couple of meters of anchor line just to try a slightly different area and was instantly rewarded with the coolest of the wrasse species – the rockcook. This was soon followed by the rarest of the wrasse species, the baillons. Swanage is one of the few places anglers find these as they come over the reef to breed, but once you get one, you often get several, as I did in that session ending on nine. In fact, Swanage is one of the few places that you can consistently catch all six of the UK wrasse species, although today I missed out on the Cuckoo Wrasse. 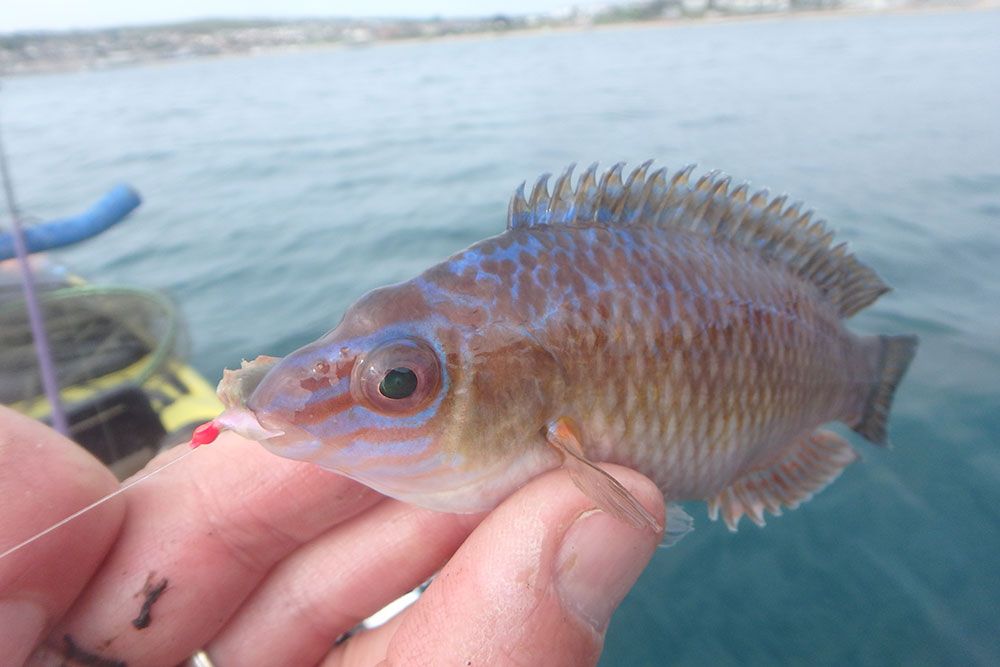 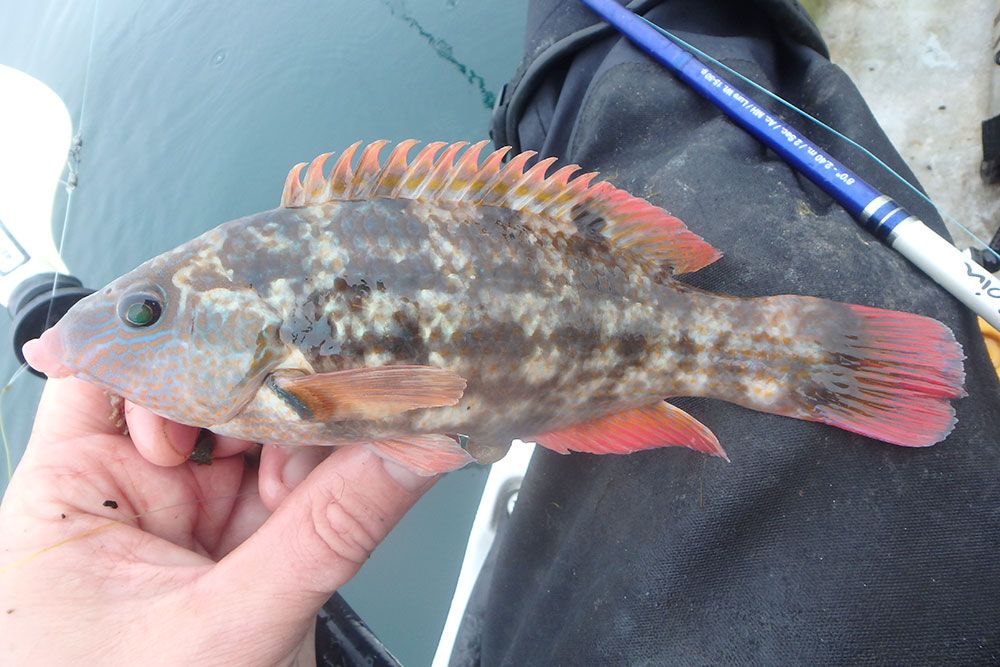 With two sessions this month, one from Swanage and another from Start Point in Devon, I have managed to significantly increase my species count for the year, taking me to 26. That is over half way to my target, but I can feel that it is going to start getting harder now as more of the common species have already been done.