For some bass anglers the first signs of winter set the panic bells ringing, I know this because I used to be one of those anglers. I would wake up listening to the wind howling and the rain beating down and start planning the following season, with no consideration as to what could be caught now. The thing is, it really doesn’t need to be like that. If you can locate fish, sport can be mind blowing…which leads me onto my latest trip out with my fishing partner, Martin Donald.

We’d planned a trip in a small weather window which had appeared out of nowhere. Checking the plans we knew that the day was going to start calm but slowly turn snotty as the day progressed. Considering the conditions we’ve encountered in the past this was a sure set window to target a monster winter bass!

Our plan was to fish with soft plastics in the hope of finding a lunker or two, of course nothing is guaranteed in the winter but the rewards are to be had if you put in the time. We arrived at our first mark at first light, the sea was still fairly calm, looking at it from the surface we both thought we’d be in for a bumper few hours of awesome fishing. We marked a few fish on our plotter at various depths but they were being cagey and not playing the game. After an hour of trying we had managed just the one fish between us, the fish weighed around 4 to 5lbs, not a monster but a chunky bar of silver none the less. We’d tried but it was time to move!

Heading to another mark a few miles further out we encountered the same situation, loads of bass showing but we only added another two to our tally, neither especially big. We use a term called “Christmastreeing” in these situations, it’s where the bass are mass shoaled up and these shoals start to represent the branches of a Christmas tree on the sounder. It looks impressive but when the bass are homing in on these massive bait shoals, it’s hard to move them onto lures. It was time to move again.

Our next move proved to be the one, by the time we’d arrived the stiff south westerly wind had picked up which put our drift at around 2knts. This makes things very difficult when trying to fish vertical over snaggy ground and you can end up losing loads of gear, surprisingly though, we lost nothing. Another boat turned up after us and started fishing too, not knowing the mark as well as we do, they kept drifting over the kill zone where we wanted our lures to be. It was blocking our drifts and making life awkward. It’s worth bearing in mind that at sea you need to have a small amount of respect for your fellow anglers and let everybody have a shot at the marks, we’re all in it for the same reason and a good deed is often reciprocated by your fellow angler.

Time was running out and we didn’t have long at the mark, we were limited by the spring tide as we had to get the boat over the bar at Littlehampton. Thankfully, you don’t always need a decent amount of time on a mark to get the best from it and the little time we had proved to be very fruitful. The fish were not climbing up the line, but we were picking a few up and the fishing was consistent. Bass were averaging 3 to 6lbs with our best at 8lbs. These fish came on the HTO Real D’Eel lure in Pearl and Green Shirasu, fished both vertically and casting downtide and sinking and drawing the lures all the way back to the boat. With this type of fishing you need to be in full concentration mode, when fish are thin on the ground hits often come on the sink, this makes it vital to manage your braid to stay in touch with what’s happening. It’s all too easy to miss a bite! 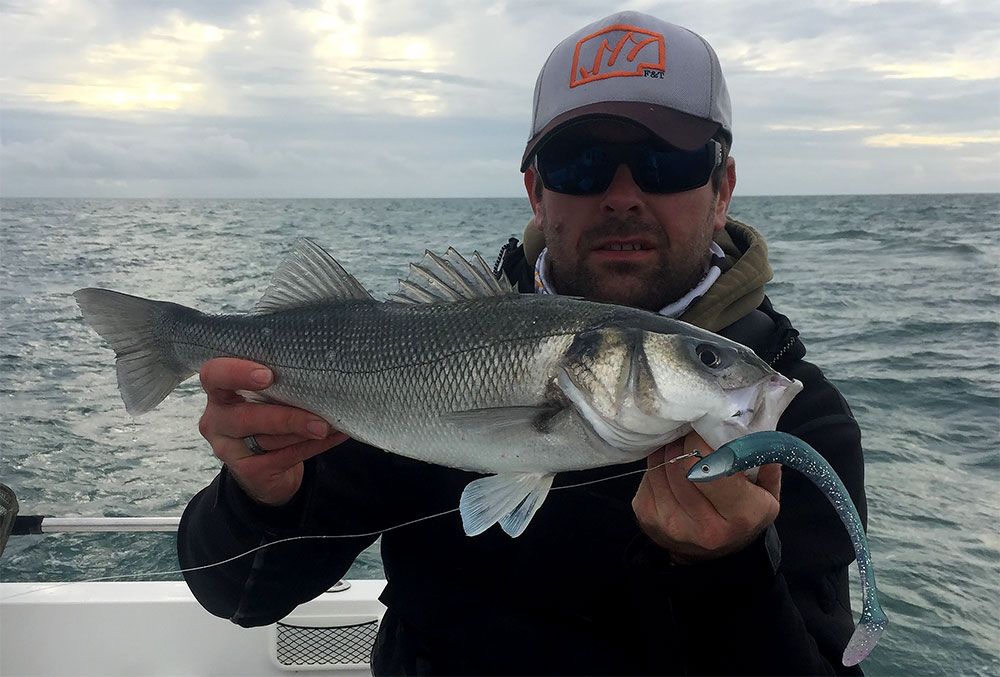 We were in the final half an hour and thankfully the other boat had left, giving us free reign over the mark. Mart had just been smashed up by a big fish whilst I was left to clean up the resident wrasse population (thanks Mart). As the clock was counting down Martin hooked into a fish, it bolted like a steam train and started to peel line off solidly. We’ve both caught big bass, so experience told us, this was no slouch.

The bass had a few storming runs, ripping line off the reel and producing some ferocious and nervy head shakes, she wasn’t happy. As Martin started to win the battle and she rose from the depths, it was soon obvious that this was a real big fish, one of the biggest we’d seen. What’s more, we’d also noticed she had a companion, her great grandmother was swimming up shotgun with her, as we both started jittering around like school kids at this immense sight, I found the composure to prep the net and get ready to land the fish. Much to my surprise Martin seemed more concerned with me getting a rod in to try and catch the other bass swimming alongside, but, we needed this bass and I grabbed the net, after one last half hearted run she was beat and I slid the net under her. At this moment Mart and I shared a man hug or two, probably shouted a few swear words and released a lot of steam, bass fishing is our passion and this was a special moment for both of us. 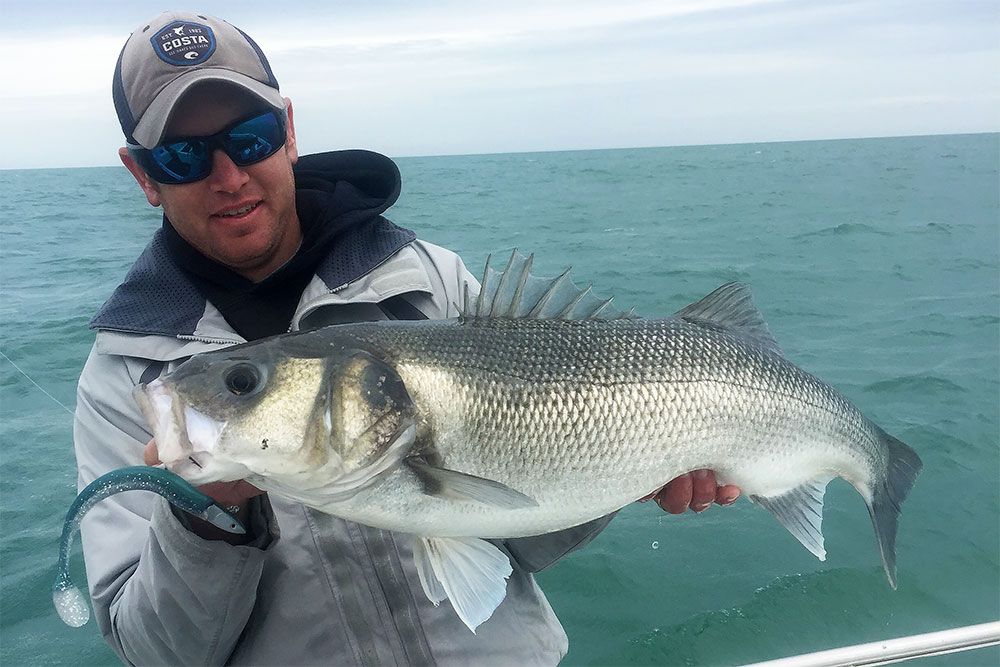 I kept the fish safely upright in the water whilst Mart sorted the scales out, the moment of truth came when she bounced the sales at 15lbs 2ozs, a new personal best for Martin, what a fish! I rolled off a few pics and we took some video of her being released, she swam away strongly and our impromptu trip was a resounding success!

It just goes to show that when you put the effort in these winter leviathans can make your dreams become reality.

Pete Cook grew up living by the sea and from a very young age, he always had huge enthusiasm for rock pooling and wading around trying to find basically anything which moved. Pete is an exceptional lure angler who specialises in bass fishing.