Winter is the time many of us head out in search of cod. Whether that be from a boat or from the shore cod fishing comes into its own from around mid October through to the middle of February. It was with this in mind I was really looking forward to getting out on the River Mersey, somewhere I hadn’t fished for a couple of years.

The trip was organised by Sea Angler regular Dave Barham and we would be fishing aboard Tony Parry’s boat Jensen, fishing out of Liverpool. Tony usually keeps his boat in Rhyl for most of the season but moves her to Liverpool from October through to February to take advantage of the exceptional cod fishing the River Mersey has to offer. 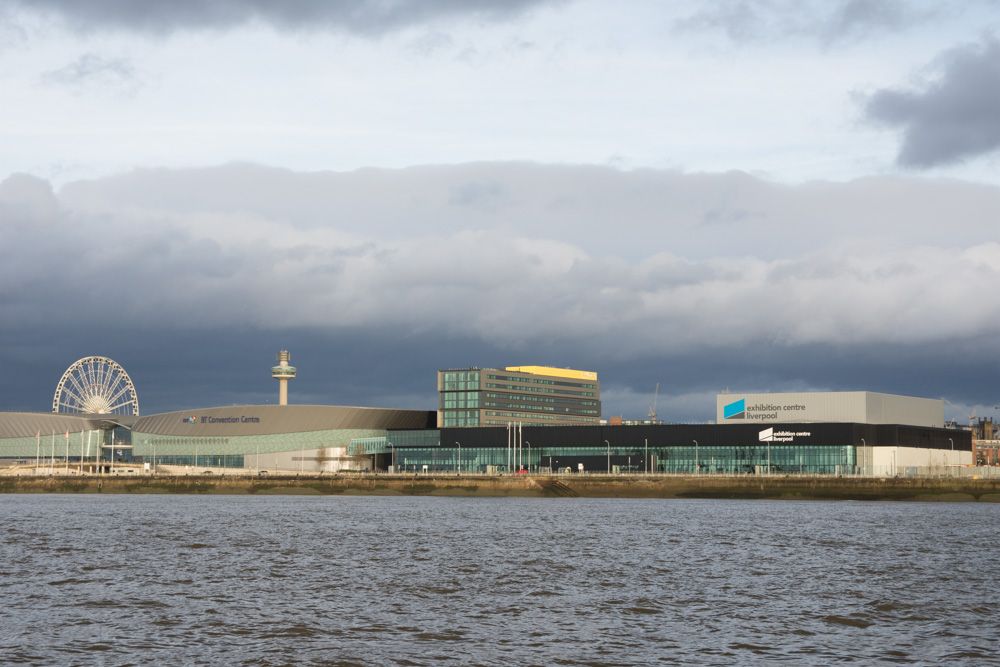 We started the day early, leaving the lock at 5:15am, it was still dark but the deck light helped enormously when rigging up and preparing those all important baits. Rigging up for cod fishing is relatively easy. I chose to fish a pennel rig compromising of a 4/0 Tronixpro Aberdeen Hook and the Pennel version of the same. With the Aberdeen hook tied to the end of 60cm of Tronixpro Krystal Shockleader in 40lbs. The pennel hook was then threaded down the line and locked in place with 4 twists of mono around the hook shank. The other end of the line I attached a size 1 Tronixpro Rolling Swivel. Due to the time it takes to create a decent cod bait, I always double pat, so I made up two of these hook lengths.

To enable a quick change from one baited rig to the other, the mainline of the reel has a Tronixpro Zip Slider slid on first, a 8mm bead after this and then I tie in a size 1/0 Tronixpro Rolling Swivel with Interlock Snap. To this I can quickly attach baited hook lengths with ease making sure I’ve always got a bait in the water. Attach whatever lead you require to the zip slider and away you go. Simple stuff and I’m sure there are all sorts of wonderful other rig concoctions out there that work best for you, but, this is the way I prefer to fish.

Baiting wise, it’s pretty simple but also requires a fair amount of bait. Cod are hungry, have big mouths and a big, stinky bait is the most effective. My bait of choice was to use frozen black lugworm, either used on its own or combined with squid or razorfish. There really is no point in scrimping on bait when cod fishing, you need to do it properly. As it turned out the combo baits did the business for most of the fish.

As we settled at anchor I cast out my first bait, casting to around 45 degrees from the stern of the boat and allowing the tide to bring the lead around in front of me before the grips locked in and the rig was secure. It wasn’t long before I had the first bite, a tell tale nod of a codling. It wasn’t massive, probably only reaching a pound, but it was good to get off the mark.

With the codling secured it was a period of whiting after whiting, even with a move of location we were still catching whiting on most of the casts. It would be a case of cast out, settle, rattle rattle! The one consolation here is that these were really decent sized whiting, perfect for a couple of fillets and I do love whiting. So whilst most went back, a few did make it into the fish box for the return home. 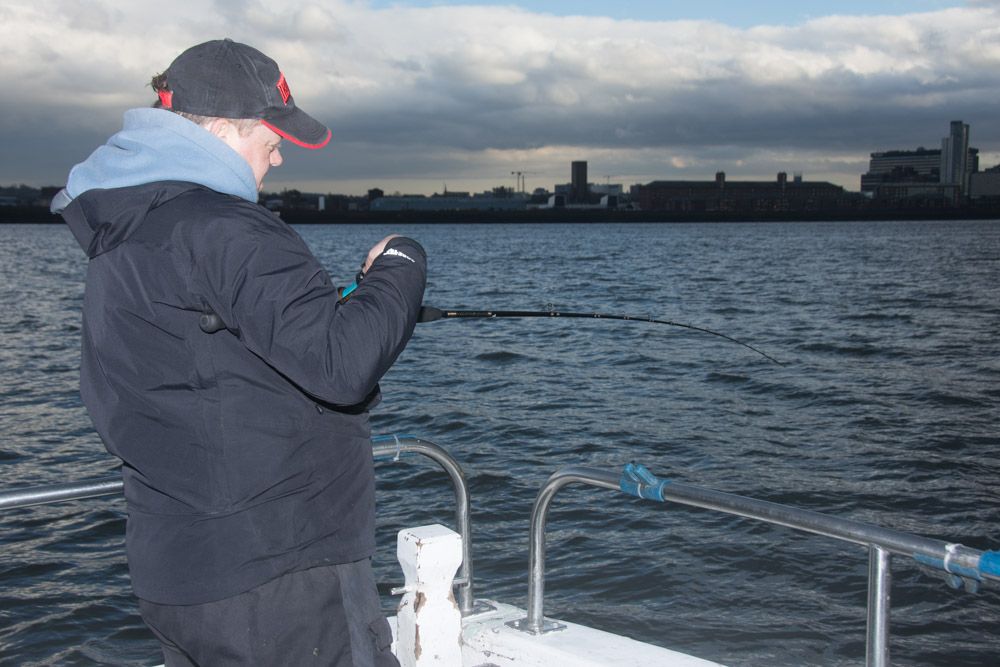 Shortly after the move I had another bite from a codling, by this point we’d had a few codling around 2lbs to the boat but nothing really big. The fish was nodding away quite happily and putting up a spirited fight. It was hanging in the tide and making the 12lb class rod I was using do a decent amount of work. After a few minutes of slowly and gently bringing the fish back to the boat everything went slack and the fish was lost. I genuinely thought this was a much better fish than the stamp we’d already had and was pretty disappointed not to see it.

As the day continued everybody on board caught whiting, with a few codling in between. It was Dave Barham who caught the biggest of the day, a cracking fish of 10lbs 9oz caught on a live baited whiting, which you can read more about in Sea Angler Magazine shortly.

Half an hour before the end I had another nod, nod of a cod bite. This one was much more savage than the previous ones, a proper cod bite! Despite the initial drama, the fish began to come in easily, it was difficult to predict the size of the fish as the tide was now running and everything felt pretty heavy. As the fish came closer to the boat, she popped up on the surface and it was clearly not as big as we’d originally thought. As Tony netted the fish it looked a couple of pounds, a great size for the pot. 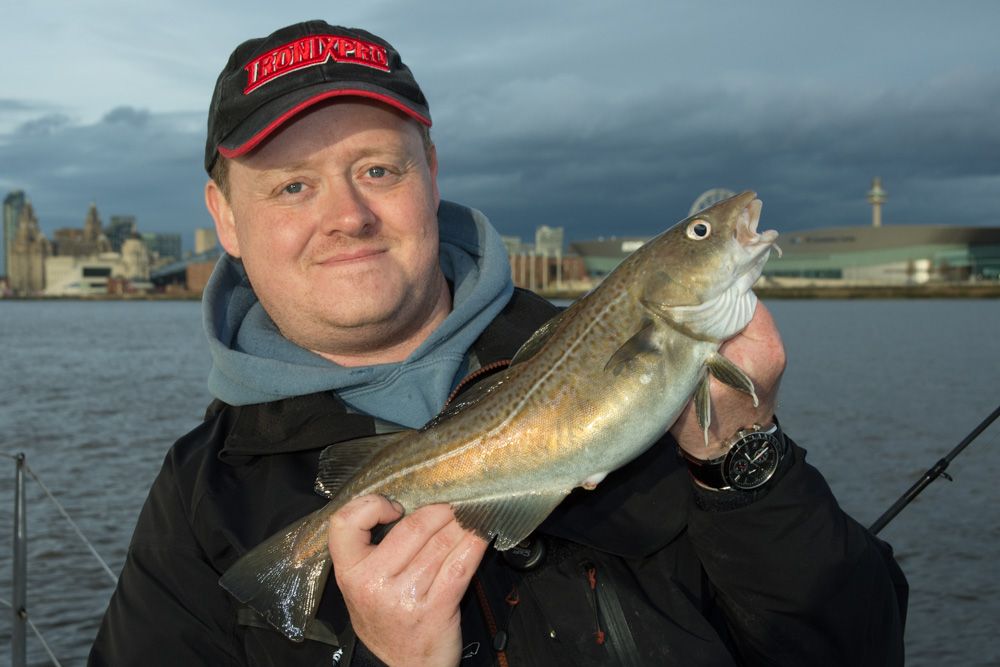 We’d all had a good days fun by the time we headed in, catching 18 codling between us.

Strangely it wasn’t as cold as we’d all expected, we’d been expecting a damp, cold day but it was the opposite. With a stiff breeze that was warm, almost tropical in a weird sense! We also saw the feint shimmer of heat haze over the water. It’s certainly one of the warmest days December cod fishing I’ve experienced!

My thanks to Dave Barham for the invitation and to skipper Tony Parry for another fun and enjoyable trip out on the River Mersey.

For more information on fishing the River Mersey on board Jensen, please visit Fish Jensen.

Mike has been sea angling since the age of three and has worked in a number of roles within the industry for more than twenty years. Primarily a boat angler who enjoys species fishing, he also enjoys targeting bigger species such as smoothhound, tope and blue sharks on light tackle.