The 26th FIPS-M World Youth and Junior Shore Angling Championships were held in Ambleteuse, France from the 15th to 22nd July 2017 and Tronixpro Team England Juniors returned with a silver medal from the team category.

The England teams arrived prior to the start of competition to practice on the championship venues. With information gathered in the build up to the competition the teams had already formulated and prepared a plan of attack. Both Youth and Junior teams worked in tandem during the practice days and the information gathered and shared was invaluable.

The first match of the Championship was held on the northern end of Ecault beach, the Junior team were searching for bass and flounders from the holes and gullies and with all new caps bar one managed a very respectable fifth on the day after an understandably nervous first ever performance. England’s Youth team also finished in fifth place and when examining the results it was clear that the Youth team had caught a good number of fish, but unfortunately the size of the fish were not enough to lift England to a higher position in the table.

On match day two, England’s Juniors were fishing the southern end of Ecault, a far shallower end with less of the deep gullies found on the northern end. With growing confidence, the team returned a better result finishing third on the day and pushing them into third overall. England’s Youth team maintained their approach from day one and a better result followed as the team were placed third overall after two days of competition with Charlie Tudball’s excellent performance earning him a zone win and the lead in the individual category.

Day three and the Junior team returned to the southern end of Ecault beach. The team pushed hard from the start, and catching numbers of fish during the state of tide in first hour of the match was going to be vital to the day's result. A superb team result with good numbers of fish gave the team its first day win, pushing the Juniors into second position overall. The Youth team endured a more challenging day, again finding numbers of fish, but struggling to find the bigger fish. Rory Eastlake earned a zone win, however other results meant that England were pushed back into fifth place overall but still in with a shout of a medal.

The weather and sea conditions the teams faced on the final day were the complete opposite to the three previous days, force seven wind straight on shore had whipped the sea into a frenzy of white water on this shallow beach. England had prepared for this and changed their approach in tackle and tactics.

England Juniors finished the competition back on Ecault north. The French team had performed brilliantly all week and were leading the Championship by a good margin. England were catching up and knew with another strong result they could push the French team, especially if they had a bad day.

With the catches in the zones being so close at the end of the match, England were unsure of the result as the team left the beach. As the final results rolled in it was a nerve wracking moment for all of the teams, the competition was fished to a length to weight conversion to allow the fish to be returned alive at the point of capture and thus size of fish would come into play.

Another day win for England’s Juniors was enough to secure the silver medal position, a solitary point behind the seemingly untouchable French team and five points ahead of the Dutch team in bronze medal position. Unfortunately for England’s Youth team, the quantity and quality of their catch was not enough to lift them into a medal position and despite their efforts the team finished sixth overall. 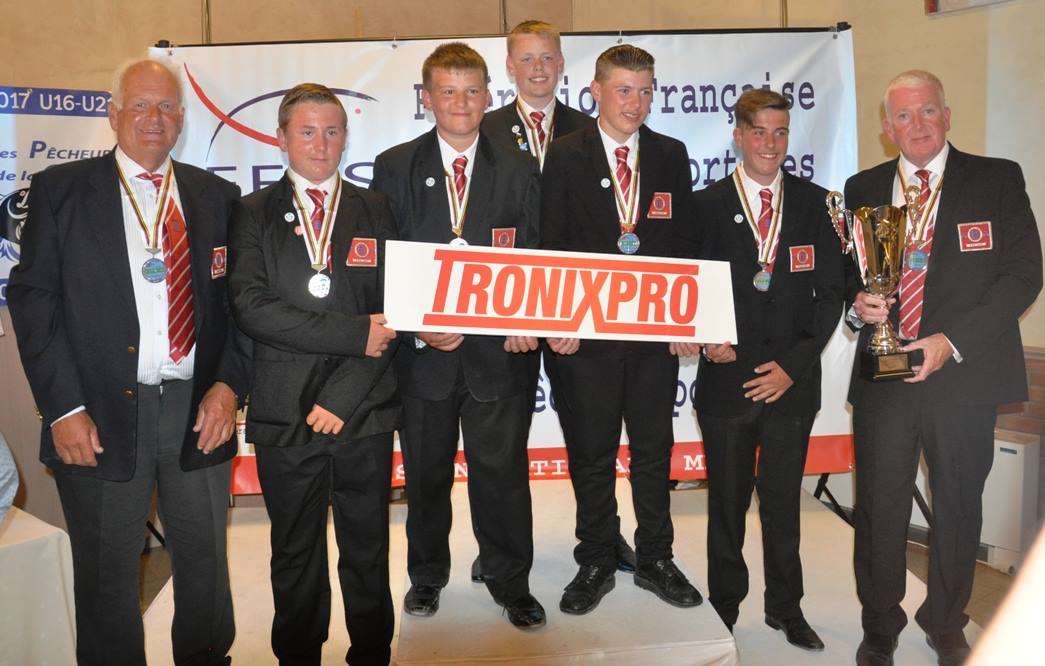 David Graham, Junior Team Manager said: “I’m incredibly proud of the team in the way they performed and conducted themselves throughout the championship. A huge thank you to Tronixpro for their financial and tackle support for the team, a forward looking company that is putting great effort into supporting our national teams. Another thank you goes to Shore Cast Leads, the pod leads you gave the team were the key ingredient to our success.”

“On behalf of the team I would like to thank the stewards and zone commanders for running the beaches, the army of volunteers for pegging the beaches each day, the organisers for running a superb Championship and the FIPS-M officials for ensuring fair play and most importantly, the other nations for the great competitive competition, but also for the great friendship and comradery shown during the Championship. Finally Chris Clark, my assistant manager and the team, Riley Price, Ben Eggleton, Tom Ryder, Ben Cloke and Adam Molloy, it was an honour to work alongside and manage you, you are a credit to the Angling Trust and your country.”

Youth Team Manager, Malcolm Stote said: “First of all I would like to thank the team for their fantastic efforts, Charlie Tudball, Joseph Smith, Rory Eastlake, Callum Graham and Rhys Hayward. On behalf of the team we would like to thank everyone again for their help , financial and tackle support from Tronixpro, the Angling Trust, Shore Cast Leads and Christchurch Angling Centre, all help is very much appreciated and thank you all very much. Also a huge thanks to George Cunningham of Tronixpro who stepped up as assistant manager and did a brilliant job.

“Also we would like to congratulate the Junior team on their silver medal on what was a difficult and tough beach to fish, well done to you all. Thanks again everyone and for all the messages of support from everybody back home.”