Over the weekend of the 11th I decided to fish a local match at Hastings. The forecast wasn’t great with strong winds and wet weather looking persistent on the day. With these conditions in mind I decided to take the Tronixpro Naga MX as my main rod, it’s a rod that has been designed to cope with these windy conditions. Designed by former World Champion Joe Arch, the rod can cope with pretty much every fishing situation you can throw at it from clean ground to rough ground. It would be the ideal choice for the venue and the weather!

So, what is the Tronixpro Naga MX? Well, the first thing you notice about it is the striking livery, it’s finished in red moving away from the common black theme of most top end rods. I like the red colour scheme, it matches in well with the tip section which is finished in a phosphorescent white so you can easily see bites at night. The rod is supplied with a set of coasters and a long reducer which can be adapted to suit. The butt is of a parallel design so anybody wanting to change the coasters for a fixed reel seat can do so easily. The cross weaved shrink wrapped butt gives a nice firm grip.

At 14ft in length the rod easily rises above the surf when it's in a tripod, this would be a godsend in the match, raising the line above the surf so that it doesn’t gather weed and other floating debris.

Match day arrived and it was an early start of 5am for me, gathering my gear together and heading out of the door I was met with blustery conditions and the dreaded rain! It wasn’t the most welcoming greeting at that time of the morning and makes me question my sanity! Good job I packed the Naga MX then!

The match is run by Hastings Angling Centre and is a well run and supported match, previous winners include current World Number One and Tronixpro Prostaff Saul Page.

The venue was as to be expected, windy and rainy which had coloured the sea up. Usually this match can throw up a decent plaice or too, but with the conditions today, this would be unlikely!

Match draws are always full of banter, with most anglers hoping for a draw around the harbour section. When I rolled up to draw my peg I pulled out 13! The quick release of banter was inevitable, but I wasn’t displeased. I was quite happy with 13!

When I reached the peg I was greeted with a hard gusting wind, surprisingly the sea wasn’t as rough as I expected and was a lovely brown colour which should have been an indication of good numbers of fish.

First thing required was to prepare, I fixed the reel to the Naga MX using a fixed reel seat and coaster, this works for me as I can use the coaster to give me grip when casting. I put out a simple overhead cast to about 70 yards followed by a fishing pendulum cast to bed the line in nicely on the spool.

The rigs I’d chosen were mainly clipped with some short snood flappers to be used close in for species such as rockling or flounder that can hug the surfline. Just before any match starts I like to have a nosey around and take a look at my neighbours set ups. Generally these anglers are local so they may have had a sneaky practice in the run up to the match or know of some recent catches. The rigs chosen either side of me were three hook short snood clipped down rigs favoured for whiting, dabs and ling.

I decided for the first few casts to use 3 hook flappers with size 6 hooks and short snoods to see if any ling were feeding. At this time of year it can be possible to catch a good quantity of these close in and can be a speedy way of building up a winning bag of fish. The time had come to start the match. I cast my frozen black lug baits only about 30 yards and stuck the rod in the rod rest up high. The extra length afforded by the 14ft Naga helped tremendously in lifting the line out of the surf improving the chances of seeing a bite. 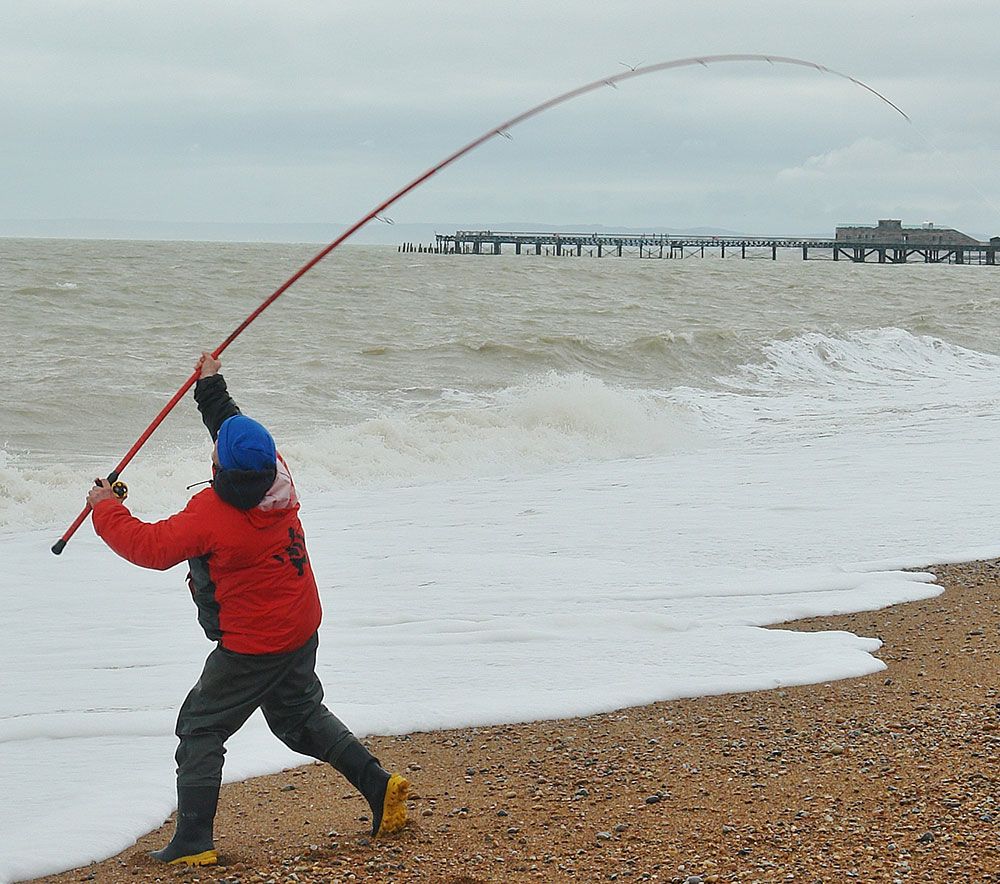 After three of four casts I decided to change tactics, I wasn’t catching anything close in, I’d witnessed the odd fish being caught at range. I went for a clipped rig with a 210g lead, a perfectly balanced setup for the Naga. I don’t consider myself a distance caster but I’m pretty confident of reaching fish on most venues around our coast. With a slow swing and a punch the pull of the rod delivered the bait to a decent distance considering the conditions and felt clean and crisp. The tip recovers almost immediately which greatly aids a powerful cast. The butt is stiff and the power progression through the blank was a joy.

Anyway, back to the match. I settled the rod back into the rod rest, the Naga tip sits nicely in most conditions, it's soft to allow good bite indication but doesn’t flap around at the first instance of wind or surf. The gentle curve when its in position sits poised nicely to show any bites well.

There were rumours flying around that there had been a few dogfish showing, so my target for my next cast was to try and capitalise on this. I sent out a three hook rigs armed with sandeel for the next three hours in the hopes of finding some doggies to fill up my weight. Unfortunately, I only managed a solitary dogfish and by the time the match had ended I was well down the running order.

It was fantastic to get out on the beach and get some fishing in. More so, to give the Tronixpro Naga MX a run out in a match. It was a joy to use and coped well with the adverse conditions. It’s a versatile tool that would suit most anglers fishing in all manner of situations around the coastline.

Chris Snow is an accomplished national and international match angler who is the Tronix (UK) Ltd National Sales Manager.